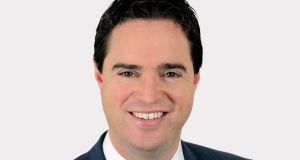 If Fianna Fáil want to take away stability, it is very hard to see how we avoid a general election, the chairman of the Fine Gael parliamentary party Martin Heydon said.

It will be very difficult for Fine Gael to continue in Government if there is no successor to the confidence and supply deal with Fianna Fáil after the autumn, the chairman of the Fine Gael parliamentary party has said.

Kildare South TD Martin Heydon was responding to comments from Fianna Fáil public expenditure spokesman Barry Cowen, who said it is unlikely his party will renew the deal.

Mr Heydon said “stability” is important for voters and the economy.

The arrangement between Fine Gael and Fianna Fáil, which underpins the minority government, elapses after the October budget. While Mr Cowen said any potential successor deal is a matter for Micheál Martin, his party leader, and Taoiseach Leo Varadkar, he said another arrangement is unlikely.

Mr Varadkar’s spokesman on Wednesday repeated that it is the Taoiseach’s position that talks should open on a new deal before the budget. Mr Martin says a review will only take place after the €3.2 billion package in October’s budget is agreed.

A number of Fine Gael TDs, including ministers, privately claimed on Wednesday an autumn election is likely if no deal is concluded. “Once they say no (to a new deal), we are not going to hang around,” said one deputy.

“Some in Fianna Fáil want to wait until we’re at the end of the deal to begin negotiating. This cliff edge strategy is senseless, serves only to destabilise, and is no way to run a country. Ultimately, this isn’t a matter for Deputy Cowen to adjudicate on.”

Mr Heydon said the public want stability, as was shown by the backlash to the prospect of a pre-Christmas election over the position of former Tánaiste Frances Fitzgerald.

“We are providing good government at the minute,” Mr Heydon said. “We are doing that because of confidence and supply and our partnership with the Independent Alliance.

“As was shown with the political crisis in December, this only lasts for as long as facilitated by the Opposition.

“What is needed is stability. If Fianna Fáil want to take away stability, it is very hard to see how we avoid a general election. We need a very clear idea of where the country is going and it must not be done on a grace and favour basis.”

He said it would be hard to see the government lasting much longer past the autumn in the absence of a new deal.

One Minister claimed Fianna Fáil did not want to negotiate a new deal because “if they get into the room it would be difficult to cause an election”.

It was also claimed that the statement from Mr Cowen - one of Fianna Fáil’s “most prominent attack dogs” - was part of a number of moves to prepare for an election.

Fianna Fáil finance spokesman Michael McGrath said there is deep frustration within his party with the government’s performance on housing and health.