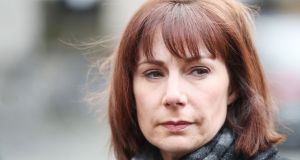 Minister for Culture Josepha Madigan has been appointed ‘co-ordinator’ of a group within Fine Gael which will campaign for the repeal of the Eighth Amendment. Photograph: Niall Carson/PA Wire.

Minister for Culture Josepha Madigan has been appointed “co-ordinator” of a group within Fine Gael which will campaign for the repeal of the Eighth Amendment.

While the party will not take an official stance in the referendum campaign, Taoiseach Leo Varadkar has appointed Ms Madigan as “campaign co-ordinator for Fine Gael activity in favour of a Yes vote in the upcoming referendum”.

The Dublin Rathdown TD will also link in with Together for Yes, an umbrella group of civil society organisations seeking to repeal the amendment.

A number of TDs were concerned that Fine Gael would, as a party, campaign for a Yes vote in the May 25th referendum, but Mr Varadkar last week told his parliamentary party that it would remain neutral.

TDs, senators and party members are to free to campaign as they please, he said.

Voters will be asked in the referendum to repeal the Eighth Amendment, which gives equal right to life to the mother and the unborn, and replace it with a provision enabling the Oireachtas to legislate for abortion.

In a statement released through Fine Gael, Mr Varadkar said Ms Madigan would work with Minister for Health Simon Harris on the issue.

“If we don’t remove the Eighth Amendment from the Constitution, nothing can change for Irish women,” he said. “Only by securing a Yes vote can we provide women with the care they need here in Ireland, without fear of breaking the law.

“I look forward to working closely with Josepha and outlining why I believe now is the time for change.”

Ms Madigan said she would be “working closely with Fine Gael colleagues who are advocating for change.

“This is a women’s healthcare issue. We know that the Eighth Amendment has not prevented abortion in Ireland. We have abortion here, it is just unsafe, unregulated and unlawful.”

Meanwhile, Renua Ireland has launched its campaign to retain the Eighth Amendment. John Leahy, the party leader and Offaly county councillor, said Renua was the only party officially in favour of retaining the amendment.

He said its “Be My Voice” campaign was getting a good reaction from voters. Renua election candidates have been canvassing with groups such as Save the Eighth and the Life Institute.

Mr Leahy said voters were not inclined to trust politicians with a sensitive issue like abortion. He also called for Mr Varadkar to participate in debate on the issue.

“If he wants to destroy Ireland’s traditional values and eradicate the rights of the unborn, he should at least have the courage to come out and take part in a public debate. I am ready to take him on at a date and time of his choosing.’’

1 All third level colleges moved to Level 3, most tuition moved online
2 Covid-19: Taoiseach warns of restrictions in cities as hospital cases pass 100
3 People asked not to cross Border as Donegal prepares for Level 3 restrictions
4 Aer Lingus staff say they are living in ‘near poverty’ and unable to cover rent
5 How Finland kept Covid-19 in check and protected its economy
Real news has value SUBSCRIBE