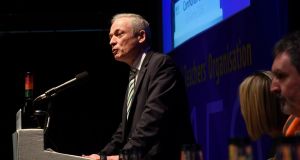 Strike action by teachers over two-tier pay rates could trigger pay freezes and loss of earnings for thousands of them, Minister for Education Richard Bruton has warned.

All three teachers’ unions formed a united front on Tuesday by backing motions calling for a campaign of industrial action unless the Government commits to a pathway for pay equality by early next month.

If this is not met, it could potentially lead to schools being shut next September.

The move ratchets up pressure on the Government to make progress on the issue within weeks.

An estimated 24,000 teachers who joined the profession after 2011 are on lower payscales than colleagues who joined prior to this date. In all, about 60,000 public sector workers are affected. The Government estimates it will cost €200 million to provide equal payscales across the public sector.

On Tuesday night, Mr Bruton said talks will begin later this month to discuss calls for equal pay. He warned that industrial action would be in breach of the terms of the public sector agreement, which could trigger pay losses for members.

“There is a provision in the pay agreement of respect for the terms of the agreement . . . clearly, there are implications set out in the legislation that governs that,” he said.

The Minister said teachers have a “justifiable” demand for equal payscales, but said the knock-on costs across the public sector would create challenges for the Government.

Industrial action by the Association of Secondary Teachers’ Ireland (ASTI), which led to the closure of thousands of schools 18 months ago, led to pay losses for thousands of its members.

Anger within the three teachers’ unions – where new entrants form a growing proportion of members – has been rising.

Mr Bruton faced heckles and jeers from protesters as he addressed delegates at the annual conferences of both the Irish National Teachers’ Organisation (INTO) and ASTI.

He is due to address the Teachers’ Union of Ireland (TUI) on Wednesday.

All three unions agreed motions on Tuesday which state that a failure to resolve two-tier pay will trigger a ballot for industrial action, “up to and including strike action”, in conjunction with other teacher unions.

The TUI gave a standing ovation to a group of teachers appointed after 2011 who told of their experiences of receiving €6,000 or €7,000 per year less than long-serving colleagues.

At the INTO’s congress in Killarney, union president John Boyle threatened to “go to war with this Government, and topple it if we have to”, over the pay disparity.