Delegate tell TUI conference of earning €7,000 per year less than other colleagues 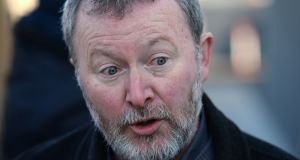 TUI general secretary John McGabhann: he said members should tell politicians that neither they nor their families would support any election candidate or party until pay equality for recently-recruited teachers was secured :

Delegates attending the Teachers’ Union of Ireland (TUI) annual conference gave a standing ovation to a group of teachers appointed after 2011 who told of their experiences of receiving €6,000 or €7,000 per year less than long-serving colleagues working alongside them in their schools. They outlined the impact this had on their ability to buy houses or get married.

Tom Dixon of the Kildare branchsaid he started teaching in 2014, and had already lost out on €30,000 as a result of pay inequality.

He said he had secured a job offering 16 hours’ teaching per week, but still had to do odd jobs to generate extra money. If he had to go on strike for three months solid and after that the Government came to its senses and ended pay inequality, he would still be up financially that year.

Stephanie Hassett from south Tipperary said those affected by the two-tier system were no longer just recent entrants but were teachers who at this stage were well established in their schools and had moved on with their lives, buying homes and starting families. The two-tier system had gone on far too long.

David Waters of the Dublin/Dún Laoghaire branch said he still earned €5,000 less than other longer-serving colleagues, and over his career would lose out on up to €100,000.

Eddie Conlon of the Dublin colleges’ branch said equal pay would have to be delivered now and not in 2021 at the end of the current pay deal or over the next two budgets, as he said was being proposed by Fianna Fáil.

Sarah Doyle of Kilkenny said after four years in the teaching profession she took home about €2,050 per month. Somebody with the same contract employed prior to 2011 would take home €2,650 per month.

Joseph Farrelly of Louth said the Government repeated that the pay gap between pre- and post-2011 entrants to teaching had been narrowed to 75 per cent. If a road was 75 per cent completed he would not drive on it.

Rachel McEntee, also from Louth, calculated that the earnings she lost as a result of being a post -011 entrant to teaching equated to working 118 days for free.

TUI president Joanne Irwin said a recent report by the Department of Public Expenditure on the two-tier pay system was “flat, stale and somewhat disingenuous”.

She said the report estimated it would cost €83 million to address the two-tier system in education. “This is a mere drop in the ocean compared with the €2 billion enthusiatically lavished on Irish Water over the last few years.

“This is all about priorities and choices. It [the €83 million cost] would be comfortably covered if the Government ended the unjustifiable lower VAT rate for the hospitality sector or tackled bogus self-employment that cost the State so much.”

The 500 delegates at the TUI conference backed proposals for industrial action if new talks with the Government do not show by next month that they have the capacity for ending all aspects of the controversial two-tier pay system.

John MacGabhann, the union’s general secretary, said TUI members should tell politicians that neither they nor their families would support any election candidate or party financially or practically until pay equality for recently-recruited teachers was secured.