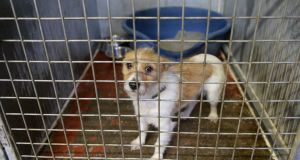 The majority of dogs that enter pounds are reunited with their owners, re-homed or transferred to welfare groups.

The number of dogs euthanised in local authority pounds continued to decrease last year with the figure now just a fraction of the high point in 2002.

The 2018 dog control statistics, which were published by Minister of State for Community Development Seán Canney on Tuesday, showed that 778 dogs were put down last year.

The statistics also include details on the number of dogs entering local authority pounds, which has also been decreasing year-on-year, down from a high of over 26,000 in 2002 to 9,961 in 2018.

Mr Canney pointed out that the majority of dogs that enter pounds are reunited with their owners, re-homed or transferred to animal welfare groups.

“It is a legal requirement for all dog owners to have a dog licence and to have their dog micro-chipped,” he said. “If a stray dog, which is micro-chipped, enters the local authority pound the microchip can be scanned and the dog easily re-united with its owner.”