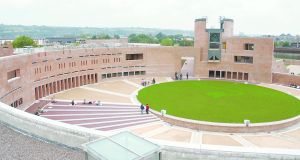 Cork Institute of Technology has failed in its bid to secure university status with Tralee IT.

Government plans to award university status to institutes of technology may prove “problematic” due to a lack of clarity over what constitutes research activity, according to an international panel of academics.

The comment is contained in a report which found the Cork Institute of Technology (CIT) and IT Tralee only partially met the criteria required to secure university status. It is likely the bid will be reconsidered in six months.

The decision comes as a blow to both institutions which had hoped to establish a new Munster technological university this year.

Under criteria set out in Government legislation, consortium bidding to secure university status are required to show 4 per cent of their students are “research active”.

This legislation defines a research student as one registered in a programme where not less than 60 per cent of the credits are assigned in respect of a thesis based on research conducted by the student.

However, an independent audit by Deloitte of these figures at CIT and IT Tralee questioned whether a number of taught masters programme were appropriately classified as research students.

While 4.7 per cent of students at CIT and IT Tralee were initially found to be research active, this figure fell to 3 per cent when taught masters programme students were excluded.

Deloitte said it was not in a position to independently verify if these taught masters students were research active.

The review panel said it also examined this issue with staff at various meetings but ultimately was not able to ascertain whether students in these programmes should be counted as research students.

The panel noted that this issue affected the panel’s work and would “remain potentially problematic in further reviews”.

Overall, the review panel recommended that CIT-IT Tralee only partially met the requirements set out in legislation to become a technological university. A key concern was that the consortium needed more work on plans for managing academic, financial and administrative matters.

The review panel said in its report that it would like to have seen “more detailed and specific information” supporting this application.

In its visits to the two institutes earlier this year, the panel said it found much time and energy had been spent on showcasing the activities of each institute at the expense of focusing on how the institutes can, do and will “act as one”.

It also said it was not clear if the consortium had the “administrative, managerial and financial capacity” to take on technological university functions.

It said there were questions regarding the resolution of financial deficits at IT Tralee, first disclosed by The Irish Times.

“While concerns were expressed about these reported deficits, the panel did not receive any planning information regarding how these deficits are to be addressed, although it did receive assurances from a representative of the Department of Education and Skills that they are looking at this issue,” the report states.

Meanwhile, Minister for Education Joe McHugh said the Government was “strongly committed” to the establishment of a technological university in Munster.

“I am proposing that the decision on the proposed establishment of the Munster technological university now targeted for early 2020 will be subject to addressing the important issues set out by the review panel . . . ” he said.

He said this approach provided the opportunity for the consortium to meet the requirements identified within the next six months.

Mr McHugh has informed CIT and IT Tralee of his proposed decision to postpone the making of an order establishing a technological university for Munster to early 2020.