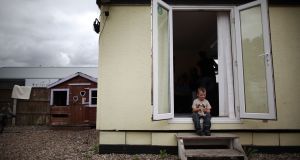 Settled residents should lose the right to object to Traveller accommodation and council chiefs should be “encouraged” to use emergency powers to force through Traveller housing plans.

These are among the radical recommendations, aimed at breaking the log-jam in the delivery of Traveller housing, contained in an expert report published on Wednesday.

This new body would be empowered to oversee local authorities’ delivery of Traveller accommodation and report those failing to the Office of the Planning Regulator.

Consultative committees currently in place at local level to plan Traveller accommodation should be disbanded and replaced with more powerful policy-making committees, and controversial “anti-trespass” legislation, widely used by local authorities to evict Travellers from publicly owned land, should be repealed, says the review.

This report, commissioned to examine the effectiveness of mechanisms to deliver Traveller accommodation, will be controversial. Authored by three respected experts on housing policy and Travellers’ rights, it will, however, be difficult to ignore and Mr English, speaking in March last year, said he would implement its recommendations.

This is among calls by the review group, which says Government should: “Put in place the legislative provisions to provide an alternative and direct route for Traveller-specific accommodation to An Bord Pleanála in line with the processes established for strategic housing development. This provision should be reviewed after a period of five years.”

The Minister, like predecessors, has been under pressure to tackle persistent under-delivery of Traveller-specific accommodation and under-spend by local authorities of their Traveller accommodation budgets.

Between 2009 and 2018, just 59 per cent of funding allocated by central government for Traveller accommodation has been drawn down. So far this year, 19 local authorities have not drawn down any of the €13 million provided and €1.84 million has been spent.

The most recent data, for 2017 [2018 data is due later this month], show the number of Traveller households living by the side of the road or in overcrowded conditions had increased by 66 per cent in five years.

The greatest planning obstacles to Traveller accommodation were “at the city, county and local level”, the report says.

There are “serious problems” due to the process known as Part 8 where residents, businesses and public representatives can object to proposed social housing. The report recommends that this power be suspended.

“Problems” are also identified “relating to the agreement by elected members to dispose of land” on which Traveller accommodation is planned.

The review’s authors are Prof Michelle Norris, head of school at University College Dublin’s school of social policy, Conor Norton, head of school in the department of architecture and planning at Technological University Dublin (formally DIT), and solicitor and former human rights commissioner David Joyce who is also a Traveller.