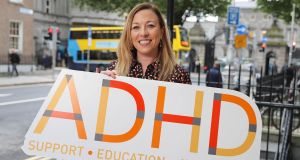 Natalie Wilson has two children with ADHD but she says her daughter is not yet getting treatment because health service waiting lists were closed. Photograph: Marc O’Sullivan

ADHD Ireland has reported the number of adults contacting its services has more than doubled in the past two years as a result of a growing awareness of Attention Deficit Hyperactivity Disorder.

ADHD is a medical/neurobiological condition in which the brain’s neurotransmitter chemicals, noradrenalin and dopamine do not work properly.

At a 40th anniversary celebration in Dublin on Tuesday ADHD Ireland said during the first nine months of 2019 it received inquiries from 274 adults seeking support and information about a diagnosis for themselves, up from 125 in the similar period in 2017.

Pointing out there was a widespread misconception that ADHD was something that just affects children, 62-year-old Pearse Stokes described the many ways it could affect people such as himself.

“You know when one partner is sitting outside in the car ready to go, the one with ADHD is the one inside the house running around looking for their keys... without their left shoe... and when they find that something else is missing”.

He said the simple matter of focusing and putting tasks – or even elements of a single task – in a sequential order is very difficult for those with ADHD. Such people were creating, often fluid thinkers but can find themselves running down the road after a lorry with the wheelie bin, wondering why they had to be told seven times to put the bin out, and wondering why they had not done it.

Others he said, could spend hours sitting staring at a computer screen without making any progress at all with tasks.

He said the problem with treatment was its inaccessibility and expense. He said medication could treat the symptoms in 20 minutes, but was only available following a visit to a psychiatrist. Even going through the private medical system, it could take you a year to get a diagnosis.

Natalie Wilson, a mother of two children with ADHD – a boy (nine) and a girl (seven), said her son was getting treatment. But although her daughter was diagnosed, she was not yet getting treatment because health service waiting lists were closed.

Psychiatrist Dr Kieron Moore said the nature of ADHD was that if it was not treated it could lead to issues with concentration and focusing, leading on to issues of depression and anxiety with consequences throughout life. It affects learning behaviour right throughout the school life and into adulthood, he said.

Chief executive of ADHD Ireland Ken Kilbride said it was “not something that people grow out of, but a “disorder that you are born with and which will be with you your entire life”.

1 Coronavirus: Close contact numbers fall in sign restrictions may be working
2 Sinn Féin’s stand on Covid is facing increasing questions from political rivals
3 Love in a time of Covid: John and Mary marry over 40 years after first meeting
4 Cab investigates behind the massive gates of Chosen Few Motorcycle Club in Dublin
5 Two hundred Irish retailers for all your online Christmas shopping
Real news has value SUBSCRIBE