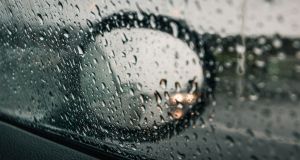 Approximately 50mm of rain fell in a short period of time. Photograph: iStock

Transport Infrastructure Ireland (TII) has said future flooding that closed the M8 motorway between Junction 12 Mitchelstown and Junction 11 Cahir on Monday cannot be ruled out.

Saying that such flooding is, however, rare, TII's Sean O’Neill said the agency works regularly with local authorities to prevent blockages to drains, that led to the type of flooding which closed the M8.

“Of course, we can’t guarantee that such incidents won’t occur again somewhere in the country simply because Mother Nature is more powerful that anything we can legislate for,” he said.

“But our engineers regularly liaise with local authorities and have seasonal briefings – they recently had a winter-ready briefing so we do do our utmost to ensure that the national road network can remain open and operational.”

Mr O’Neill was responding to questions from The Irish Times following a flooding incident on the M8 between Mitchelstown and Cahir on Monday night when heavy rain led to closure of the motorway.

Approximately 50mm of rain fell quickly, while water coming down from the Galtee Mountains was prevented from entering a culvert north of the motorway by a fallen tree which was blocking the culvert entrance.

It led to water flowing into surrounding fields and from there, the flood waters ran on to a local road and then the M8, resulting in 200m of the northbound carriageway being under water to a depth of 1.5 metres.

According to Mr O’Neill, diversions were quickly put in place rerouting traffic around the flooded area along the adjacent old N8, which meant hundreds of affected motorists should not have been delayed hugely by the incident.

However, about eight vehicles had got stuck in the flood waters and had to be removed by emergency services. It took several hours to clear the motorway.

According to Mr O’Neill, anyone who paid a toll to operator DirectRoute at Watergrasshill to head north on the M8 should be entitled to a refund if they can verify payment and that they were affected by the flooding.

Mr O’Neill said the issue was a once-off due to the blocked culvert and did not call into question the motorway design which meets international standards with an appropriate camber to ensure normal water runoff from the surface.

Irish motorways, which now account for 1,200km of the 5,300km national road network under TII control are future-proofed in that they are designed to cater for one-in-50-year storm events compared to the previous one- in-25-year standard. Some 328km of motorways are maintained under existing public-private partnerships with 588km maintained directly by TII through Motorway Maintenance and Renewal Contracts (MMARC) with private contractors.

Mr O’Neill pointed out that the issue on the M8 originated off the motorway and therefore was not the responsibility of the contractor. But TII contracted staff had assisted staff from Tipperary County Council in clearing the culvert and resolving the problem.

AA Ireland spokesman, Barry Aldworth said a number of motorists contacted the association to say traffic was particularly heavy in the area as a result of delays caused by the flooding but they did not receive any complaints.

“Motorways in particular are built to accommodate heavy rainfall and drain away appropriately – yesterday [Monday] was a bit of a freak event but we’re not aware of stretches of motorway that are subjected to a regular flooding problem.”