The legacy of the walks scheme 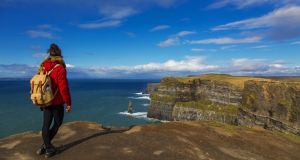 Early in the 21st century, little existed to attract walkers to Ireland, as access problems abounded. It was mostly just the high mountains – which were really only suitable for experienced hillwalkers – that were accessible.

As an example, the sublime coastal section of the Burren Way leading from Hag’s Head to Doolin that traversed above the Cliffs of Moher was out of bounds. The trail had been diverted inland on public roads, because of an access issue near the cliffs.

Irish walking trails then consisted almost entirely of long-distance routes that timidly avoided private land by following public roads and gloomy trails through standing armies of Sitka spruce. Unsurprisingly, the number of visitors to Ireland participating in hillwalking or hiking was extremely low, slumping to 168,000 in 2003 as a French walking magazine headlined with “Irlande fermé”.

“Must do” is, however, a great master. Action was required, and eventually it came. The common complaint that landowners were excluded from the benefits arising through rural tourism was now addressed. Piloted during 2008 in Tipperary, Cork, Donegal and Roscommon, an innovative walks scheme was afterwards rolled out over much of the country with landowners paid to maintain walking routes through their land.

Twelve rural recreation officers were appointed to administer the scheme, which meant that for the first time farmers were inside the walking tourism tent.

The initiative was immediately popular. Soon, 40 walks had been developed and 1,805 landowners were receiving payments. Some of Ireland’s most iconic locations now became accessible, with the scheme being central to reopening the Cliffs of Moher coastal path.

Another beneficiary of the programme was the Sheep’s Head Way in west Cork. Now one of Ireland’s most popular long-distance trails, it has done much to revitalise the economy of the eponymous peninsula. In Donegal, the newly created Bluestack Way was the first to benefit from the scheme, while the Pilgrim Way on Slieve League was also developed to take pressure off the badly eroded cliff path to the summit.

It was an exciting time for outdoor recreation, and Con Ryan was one of the early pioneers. As rural recreation officer for Tipperary, he oversaw the rollout of the walks scheme in the county. “It had two effects. The first was to introduce people to walking who would otherwise have never become involved and the second was to bring badly-needed income to rural Ireland at a time of deep recession.

“Some landowners have earned up €26,000 for their contribution to the scheme, while there was also the income from walkers visiting these rural areas for the first time. As an example, the well-known Upperchurch Walking Weekend, which attracted up to a thousand visitors to the local community, was only possible because of investment under the walks scheme.

“Then there was what the farmers earned while working part-time on local employment initiatives such as the RSS [rural social scheme] as they developed the walks. It was definitely a win-win for walkers and local communities alike with the main problem being that there was insufficient funding to meet the demand.”

Having achieved much in a very short time, the walks scheme was closed to further applicants as the cold winds of recession took their toll in 2010. It has remained in abeyance since, with only the existing routes being funded. Nevertheless, walking tourism to Ireland has never looked back. With a new confidence in the air, overseas visitors participating in hiking or cross-country walking grew exponentially, reaching a record of almost 2.7 million in 2018.

And the further good news is that the walks scheme has now reopened for new applicants. The Department of Rural and Community Development is inviting expressions of interest from trail management committees and other groups interested in developing trails.

Such expressions of interest should be made to the local authority or development company in the area for the proposed walk. Information on the scheme is available by visiting gov.ie and searching for “walks scheme”.

Trails thanks to the walks scheme

Most accessible of the Irish long-distance trails, the Slieve Bloom Way is a very manageable three-day circuit – 70.5km – with generally benign underfoot conditions. Developed to its present standard by Ann Lanigan, the route starts from the wonderfully scenic Glenbarrow and involves a relatively modest total climb of 1,275m. Aside from the village of Kinnitty, there is no accommodation or habitation along the route, which makes it an ideal away-from-it-all experience for walkers. It is also perfect for those who enjoy wild camping amid the solitude of the hills.

In many ways the jewel in the crown of Irish low-level trail walking, the Cliffs of Moher coastal path is undoubtedly Ireland’s busiest low-level route. Reopened in 2013 under the guidance of Eimer McCarthy, it takes a memorable four hours to complete. The path offers especially breath-taking views of the cliffs and the Aran islands.

The Cooley peninsula drips with a history stretching back to the legendary Táin Bó Cúailgne (Cattle Raid of Cooley), when Cuchulain defended Ulster against Queen Maeve of Connacht. An unforgettable, but not overly challenging walk which commemorates the Táin starts and finishes from medieval Carlingford and circuits the Cooley peninsula. Taking two days to complete with an overnight in Ravensdale, it offers spectacular views north over Carlingford Lough to the Mourne mountains and south along the great sweep of Dundalk bay.

Ideal for family outings, this loop is redolent with many mythological echoes. While following the purple arrows on an easy two-hour circuit, you can explain to the kids that the remarkable gash in this plateau was created by a fleeing demon, taking an angry bite from its summit and later dropping it to form the Rock of Cashel. Young people will love the final rocky scramble to the 15m summit cross, from which there are spectacular views over seven counties.

“Water and ground in their extremity” has been adopted from Seamus Heaney’s poem Peninsula to sum up the Sheep’s Head experience. And it does so beautifully on the 88km core of the trail that circuits the peninsula by traversing serene and almost entirely pristine terrain. Brainchild of James O’Mahony, it is claimed by many to offer the most beautiful scenery in Ireland.