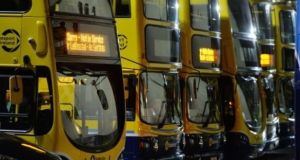 The National Transport Authority (NTA) has said it may consider a community transport service to supplement the controversial BusConnects plan.

The National Transport Authority (NTA) has said it may consider a community transport service to supplement the controversial BusConnects plan.

LocalLink provides a combination of scheduled bus routes as well as door-to-door services in towns, villages and rural areas under the direction of the National Transport Authority (NTA).

The NTA would be “open to considering a LocalLink type service as part of the network redesign,” a spokeswoman told The Irish Times.

David O’Connor, head of environment and planning at DIT, has said while BusConnects is needed for the capital, it should be supplemented by a service similar to LocalLink.

Mr O’Connor said such a service in urban areas would be “terrific”. There could be a hospital service around Beaumont or St Vincent’s, connecting people to the main post office, the employment centres,” he told The Irish Times.

Mr O’Connor said there will be a “real problem” if the city can’t develop the bus network.

“At the moment our public transport mode share performance is unsatisfactory. The figures in the 2016 census put us at about 22 per cent of all trips being on public transport.

“We need to double that to get to cities like Vienna, Copenhagen, Zurich, the cities Dublin is competing with.”

Age Action has told the NTA callers to its helpline have expressed concerns about proposed changes to direct routes to hospitals. It would also welcome a community-based transport system that would supplement BusConnects.

“Many people, including older people and those with a disability, will see a change to their bus routes and even those that will not lose direct access will have to walk and wait for connecting buses under the BusConnects scheme,” a spokeswoman for Age Action said.

“A community-based transport system for urban areas that supplements the BusConnects system and meets the needs of older people would be welcome and help many to remain active and to reach essential medical appointments.

“It is crucial that older people themselves are involved in the design and development of any services, and that it is introduced on a phased basis to allow for an assessment of whether it is meeting their needs.”

The plan acknowledges while some bus users who currently have a direct route into the city centre from where they live would have to change buses to reach their destination under the redesign, journey times will be significantly shorter.

Some 30,000 submissions were received by the NTA in relation to the redesign of the bus network when public consultation closed at the end of September. A revised network is due to be published in early 2019 and a further round of public consultation will begin. The new network is then expected to be rolled out in 2020.

Details of the first four proposed core corridors were released by the NTA in November.