‘Democracy is a very useful tool but it cannot dictate right and wrong,’ says activist 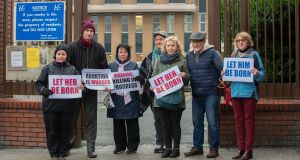 Anti-abortion protesters outside the gates of Our Lady of Lourdes Hospital, Drogheda on Monday. Photograph: Ciara Wilkinson

A group of “concerned citizens” stood in protest outside Our Lady of Lourdes Hospital, Drogheda, Co Louth on Monday morning after it was claimed on social media that the first abortion at the hospital was scheduled to take place.

The hospital has a busy maternity unit that serves a large portion of the north east of the country.

The seven-strong group held placards saying “Abortion is murder”, “Let him be born”, “Killing in progress”, and “Let her be born”.

One of the group, Charles Byrne, said, “it is a quiet protest. We are not going to leaflet people, we had the leaflets in the referendum; this is merely to show support for that child that is losing their life today.”

Mr Byrne was one of a number of people who took a legal challenge against the outcome of the referendum on the eighth amendment.

A post on Sunday night on the Facebook page “Pro-Life Ireland” claimed: “The first abortion in our Lady of Lourdes hospital is scheduled for first thing tomorrow morning Monday 7th. The priests in Drogheda have asked for prayers that the woman will have a change of heart overnight and not go through with the procedure. Please spread the word.”

Speaking at one of the main entrances to the hospital on Monday, Mr Byrne said “we are a group of concerned citizens who have come together”.

“I am here because I deeply and profoundly care about the right to life of every human being. I believe that every single human being is precious... Each individual is a unique person. We are here because we believe hospitals need to be places of care through compassion,” he said.

Asked about the result of the referendum, in which a majority voted in favour of removing the constitutional ban on abortion, Mr Byrne said: “Justice does not come by majority. If 100 per cent of people voted for anything it does not make it right or wrong.

“Democracy is a very useful tool but it cannot dictate right and wrong. Is ending a human life right or wrong? That is my question to people.”

Also in the group was Anne Trainer from Ardee, Co Louth. She said all four of her children were born in Our Lady of Lourdes Hospital.

She said she nearly died after the birth of two of them and she spoke highly of the care she received.

“I started to haemorrhage on my third child and on my fourth child, he was three weeks old and I was brought in and nearly died. I had to have a life-saving operation.”

She said she was concerned about the staff involved. “It is heartbreaking what they [staff] are being asked to do.”

She also said she was also outside the hospital because “my third child has Down syndrome and I feel the Down syndrome community are a particular target”.

A number of pregnant women walked through the gates past the group. One woman, who did not want her name used, said, “it is ridiculous, it is a woman’s choice”.

The HSE does not comment on individual patients and on Monday it said it was not commenting on the matter.

However, Minister for Health Simon Harris said he found it “extraordinarily unedifying” for people to be identifying hospitals where the abortions were purportedly being carried out.

The Minister added if information regarding a patient had been leaked from the health service it would be very serious.

“The only people that need to know why a person is going into hospital for any sort of procedure is the doctor and nurses involved and the patient themselves,” he told Newstalk.