Northern Irish should be entitled to EU citizenship post-Brexit - report 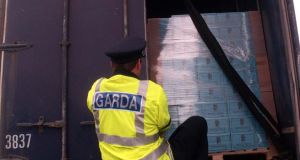 A garda working on the Border between counties Cavan and Fermanagh. Human rights groups have warned the EU’s draft Brexit treaty risks breaching the Belfast Agreement by creating a difference in human rights protections on the island of Ireland. Photograph: Eric Luke

People in Northern Ireland should continue to be entitled to EU citizenship and to vote in European elections post-Brexit, a north-south committee on humans rights has recommended.

The joint committee comprising the Northern Ireland Human Rights Commission and the Irish Human Rights and Equality Commission has warned the EU’s draft Brexit treaty risks breaching the 1998 Belfast Agreement by creating a difference in human rights protections on the island of Ireland.

Without the urgent introduction of safeguarding measures, the draft withdrawal agreement could undermine the protections contained within the 1998 agreement, the committee has said.

The committee recommends in a policy statement that people in Northern Ireland continue to be offered EU citizenship after Brexit, should be able to vote in European Parliamentary elections and should be entitled to have their EU rights protections enforced by the European Court of Justice.

The recommended measures are likely to deepen divisions between the UK and EU because they would continue to maintain ties between Northern Ireland and the EU post-Brexit.

British prime minister Theresa May has made ending the ECJ’s oversight of the UK’s affairs one of her government’s red lines in reaching an agreement on Brexit.

The joint committee, set up under the 20-year-old peace agreement, recommends in the policy statement that the final Brexit withdrawal deal should offer continued EU citizenship, or equivalent rights, to at least all of the people of Northern Ireland, as set out in the Belfast Agreement, after Brexit.

Ireland should extend the franchise for EU Parliamentary elections to all the people of Northern Ireland after the UK quits the EU in March 2019, the statement says.

Another recommendation says the December 2017 commitments of the UK government ensuring no diminution of human rights under the Belfast Agreement should be made enforceable in the final Brexit treaty text and that the rights of individuals are protected “on an ongoing basis.”

“We are concerned that the UK withdrawal from the EU threatens to undermine the Belfast (Good Friday) Agreement by creating uncertainty for human rights protections within Northern Ireland,” said Les Allamby, chief commissioner of the Northern Ireland Human Rights Commission.

Emily Logan, chief commissioner of the Irish Human Rights and Equality Commission, said the policy statement sets out how negotiators on both sides of the Brexit talks can ensure the commitment to the Belfast Agreement “can be carried through to the final deal.”

“We are now seeking assurances from the UK and Irish Governments that no rights are diluted as a result of Brexit,” she said.

In the statement to the British and Irish governments, the committee says six requirements should be included in the final EU-UK treaty to mitigate concerns around the protection of north-south equivalent equality and human rights:

- There should be no diminution of human rights and equality standards.

- North-south equivalence of rights in Ireland should be upheld after the UK quits the EU in March 2019 in case discrepancies emerge between UK and EU law and Northern Ireland should continue to fall under EU human rights and equality legislation.

- Border communities and migrant workers must be protected so that any increased immigration controls introduced post-Brexit do not lead to racial profiling.

- Any evolving justice arrangements should not water down rights

- People in Northern Ireland should be allowed to elect representatives to the EU’s democratic institutions so as to avoid a “lesser form of EU citizenship.”