This video portrait of Dublin tailor Jude Hughes by Irish Times video journalist Bryan O’Brien has won him the Videographer Of The Year Award from the UK Picture Editors Guild. Born in 1941, Jude grew up in industrial schools, before choosing tailoring as a profession. He has been active all his life with organisations involved in fighting inequality. Video: Bryan O'Brien 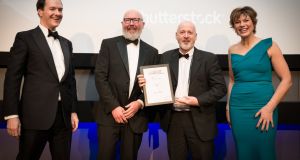 Bryan O’Brien, third from left, with his award at the UK Picture Editors’ Guild Awards in London.

Irish Times photographer and chief video journalist Bryan O’Brien has been named videographer of the year by the UK Picture Editors’ Guild Awards.

O’Brien, who joined The Irish Times in 1998, was named the winner of the video category for his three-minute short film on the Dublin-based tailor Jude Hughes which was published on The Irish Times website in December 2017.

The video tracks the day in the life of Mr Hughes working in his tiny, cramped basement workshop on Middle Abbey Street where he runs his Rapid Alterations Service.

Born on the Navan Road in 1941, Mr Hughes never met his parents and was educated in industrial schools.

“I’ve been told I have Caribbean connections to Trinidad but I do not have any proof of it,” says Mr Hughes in the video.

“You could pick your trade: farming, bakery, shoe making, carpentry and tailoring of course. I used to watch people in some of these trades and some of them injured themselves . . . I felt you couldn’t hurt yourself with a needle.”

O’Brien was presented with his award by editor of the London Evening Standard and former UK chancellor of the exchequer George Osborne at a ceremony at the headquarters of the Honourable Artillery Company in London.

O’Brien said he was delighted to be one of the three video journalists nominated for the award but had not expected to win. “It’s a really prestigious competition attracting the best photographic talent from the UK and I was up against colleagues from The Financial Times and Bloomberg so I was thrilled when my name was called out for the top prize. I’m also delighted that the piece that won it is a piece about Jude Hughes, the ‘rapid tailor’ a really nice man who’s led an amazing life.”

Charles McQuillan, who has contributed to The Irish Times, was named the Genesis Regional Photographer of the Year at Monday night’s event.

Guilhem Baker from London News Pictures was named Shutterstock Press Photographer of the Year for his photos of the Grenfell Tower fire in June 2017.