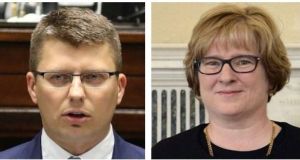 Poland’s deputy justice minister Marcin Warchol and Ms Justice Aileen Donnelly. The High Court’s decision means extraditions to Poland from across the EU may come to a halt, according to Irish lawyers

The Polish government has attacked the High Court decision to delay the extradition of a man over concerns about the rule of law and judicial independence in Poland.

Deputy Justice Minister Marcin Warchol said that, by not handing over 31 year-old Artur Celmer on suspected drug trafficking charges, Ireland was “delaying the punishment of a serious drug mafia criminal sought across Europe”.

But opposition leaders and leading lawyers hit back at this interpretation, blaming the delay on the Polish government, whose far-reaching reforms of the judiciary alarmed the High Court into seeking guidance from the European Court of Justice (ECJ).

The court’s decision means extraditions to Poland from across the European Union may come to a halt, according to Irish lawyers.

There are more than 50 applications for extraditions to Poland under the European Arrest Warrant system before the Irish courts, the bulk of which will now be stayed.

The deputy minister said the decision to grant a European arrest warrant request - or not - must be based on concrete facts.

“It is incomprehensible that general, abstract deliberations, projections and speculations become the basis of such an important decision as the handover of a criminal sought in the whole of Europe,” said Mr Warchol to the PAP news agency.

Irish concerns on judicial reform and appointments in Poland were hypocritical, he added, given judges to the Supreme Court in Ireland are appointed by the president on a motion from the Government.

“It is a sad day for Poles and Poland,” said Kamila Gasiuk-Pihowicz, a leading MP for the opposition Nowoczesna (Modern) party. “We were a leader of democratic changes in this part of Europe but, at the moment, we can only feel ashamed that we are being ruled by such people.”

She predicted other European courts will follow the Irish example and reject requests from Polish courts, in particular family court cases involving Polish and non-Polish couples.

Ms Gasiuk-Pihowicz, a lawyer by training, praised praised Ms Justice Aileen Donnelly for “seeing through the lie” that the Polish judiciary is still independent.

“I am impressed by her precise manner and knowledge,” she added.

Last December, for the first time in EU history, the Brussels executive activated disciplinary procedures against a member state and gave Warsaw until next Tuesday to act on its concerns over judicial reforms and their impact on the rule of law.

For two years Warsaw has argued variously that the European Commission has misunderstood and misinterpreted reforms necessary to root out post-communist cronyism- or that Brussels is interfering in Poland’s sovereign affairs. Any attempts to sanction Poland at EU level may fail given Hungary has signalled it will back Poland and prevent the required unanimous vote.

On Tuesday the leading Gazeta Wyborcza daily argued that the High Court’s ECJ referral may prove more challenging to the Polish government than the two-year European Commission’s investigation and threat of sanctions.

Leading law professors in Poland and around Europe welcomed Justice Donnelly’s decision to request clarity from the ECJ, which Warsaw is more likely to heed than the commission on Poland’s judicial reforms.

“The Polish government cannot present as victory an ECJ verdict that the rule of law has been undermined in Poland,” said Prof Marcin Matczak of the University of Warsaw’s law faculty. “I hope this case will be the beginning of the end of the dismantling of the rule of law.”

Monday’s High Court decision has attracted considerable attention in legal circles across Europe for for calling into question the mutual trust in EU legal systems goes to the heart of the bloc.

“The argument that all is not well with Poland’s legal system could be applied far beyond the European arrest warrant,” said Prof Franz Mayer, constitutional law professor at the University of Bielefeld. “Then everything starts to slide and you could paralyse the single market,”

Prof Mayer doubted the ECJ would be enthusiastic to accept the legal and political hot potato from Dublin. “I don’t think they will try to duck and cover,” he said. “But as with all cases with bigger consequences, they will probably deal with this as narrowly as possible - depending on the question asked.”