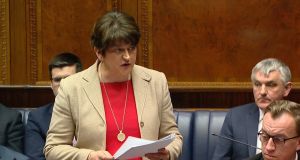 In quite a personal statement Ms Foster said she came into politics not for gain but to advance the values important to her and to try to make people’s lives better for people in Northern Ireland. . . and to heal divisions. File photograph: PA

The Sinn Féin finance Minister Conor Murphy has moved to implement a number of measures to try to prevent a recurrence of the Renewable Heat Incentive (RHI) scandal.

And during a debate in the Northern Assembly on Monday on Sir Patrick Coghlin’s report into the botched cash-for-ash scheme, First Minister Arlene Foster again apologised for her failings.

And appearing close to tears, she referred to personal “dark moments” over recent years. She welcomed the fact that there was no finding of political or other corruption in Sir Patrick’s report published on Friday, and spoke of the affect such claims had on her and her family.

Sir Patrick was critical of some Ministers, including Ms Foster, some special advisers and the Northern Ireland civil service, but said there was no “corrupt or malicious activity on the part of officials, Ministers or special advisers”.

Ms Foster, who as Minister of Enterprise, Trade and Investment was the responsible Minister when the RHI scheme was introduced in 2012, told Assembly members that the report must become a “roadmap to fix the broken symptoms”.

In quite a personal statement Ms Foster said she came into politics not for gain but to advance the values important to her and to try to make people’s lives better for people in Northern Ireland. . . and to heal divisions.

“That’s what motivates me and that is why I have such deep and personal regret at the mistakes that were made in this scheme,” she said.

Ms Foster added, “When I look back it was the allegations of corruption that were of the utmost concern. To allege that someone is corrupt is amongst the most damaging accusation to be levelled against anyone.

“I therefore welcome the clear and categorical finding by Sir Patrick that corruption played no role in the failure of this scheme. To those who made such claims they should now publicly accept this finding.”

Referring to how some politicians had alleged corruption, Ms Foster said before questioning anyone’s integrity such people should wait for the facts.

And referring to how the RHI disaster prompted the late Martin McGuinness to resign as Deputy First Minister in January 2017, thus bringing down Stormont, Ms Foster said “there was no good reason to bring these institutions down and keep them down for so many years”.

“This is not a day for recrimination, it is a day for learning,” added Ms Foster who said lessons would be learned from the debacle and action taken to prevent such future situations.

“I acknowledge my role in damaging public trust but I am determined to play a full part in rebuilding that trust,” she said.

As she finished her remarks Ms Foster became emotional and seemed close to tears as she thanked God, her family and her friends and colleagues who helped her “through some very dark moments over the last couple of years”.

She spoke about her “precious family who had to listen to so many people speak of their wife, daughter, sister and mother in such a disparaging way [and] who never stopped believing in me as a person of integrity”.

Meanwhile, Sinn Féin finance Minister Mr Murphy told the Assembly that a meeting of the Northern Executive earlier on Monday had agreed to strengthen governance and accountability arrangements for Ministers in the wake of the RHI report.

Measures to address the report’s proposals included establishing an external, independent panel to identify any potential misconduct by civil servants in relation to Sir Patrick’s findings. Its members are Niamh O’Donoghue, a former senior Irish civil servant with almost 40 years’ experience, June Milligan, a former British diplomat who also worked with the Welsh government, and Jim Barron, a former senior civil servant who worked for the British Cabinet Office for 27 years.

Mr Murphy said part of the panel’s work would be to “identify any potential disciplinary charges relating to civil servants”.

During Monday’s debate DUP MLA Christopher Stalford referred to how in relation to RHI the report was severely critical of two senior Northern Ireland civil servants, David Sterling, current head of the service who is to retire in August, and Dr Andrew McCormick.

“The significant failings identified and the clear blame attached to those named individuals by the inquiry require swift and immediate action,” he said.

Mr Murphy said that under a new Ministerial code and guidance Ministers must be “responsible for the management, conduct and discipline of their special advisers”. In addition Ministerial meetings and decisions must be recorded.

The new code also strengthened “the requirements for Ministers to declare interests and avoid conflicts of interest,” he added.