The ability to process test results is also being ramped up 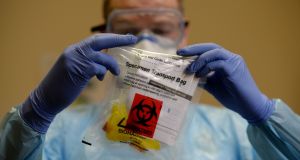 Testing it is being applied to those with symptoms consistent with the virus given that community transmission is likely to be increasing. Photograph: Alan Betson

Scaled-up testing for coronavirus across the country from this week is expected to confirm a large increase in cases.

The measure is critical at this stage of the pandemic in Ireland to have any chance of curbing its worst effects, according to public health doctors.

In tandem with more extensive testing, the ability to process test results is being ramped up, with 10 acute hospitals building capacity to run coronavirus tests with automated systems to process large numbers of samples at any one time.

The initial five include the Mater Hospital and St Vincent’s hospitals in Dublin, and Galway University Hospital. Essentially this is decentralising testing from the National Virus Reference Laboratory based in UCD, which will continue to be a key testing facility.

GPs were able to electronically book tests through the HSE digital network from Monday. Up to now people looking for a test had to ring their GP, who then contacted public health services or the National Ambulance Service, which meant long delays.

HSE chief operations officer Anne O’Connor confirmed, however, that due to a backlog of GP referrals the Heathlink electronic system failed on Monday morning. An interim solution was put in place and it was expected it to be fully operational later in the day.

Establishing the true incidence of Covid-19 is necessary so health services can quickly update planning in response to an unfolding scenario and to manage cases in a better way by improving “contact tracing” and concentrating efforts where most cases are occurring with widespread community transmission.

The changes coincide with criteria for testing being expanded.

Irish College of General Practitioners president Dr Mary Favier said the new arrangements “will make a considerable difference”, but the public needed to be patient until the service was fully operation over coming days. The service was for those with symptoms consistent with the virus; not the “worried well”. Those being tested would be given a code and time slot for their test.

She said the true figure on cases in Ireland could be 2,000 as indicated by some modelling. “That is why testing is being scaled up – we want to know.”

Initially 19 designated centres will provide testing after GPs determine they are clinically warranted. This will increase over the week to at least 34.

The HSE confirmed ambulance service testing in homes and use of roving vehicles would continue.

Testing centres are being concentrated in the east and southwest where most cases are occurring. These sites will be attendance by referral only – individuals cannot simply show up and receive a test.

Prof Sam McConkey, head of the Royal College of Surgeons in Ireland’s department of international health and tropical medicine, who has been tracking the global spread of coronavirus, has underlined the need to create rapid testing ability – what he called “surge capacity for identification and testing” of Covid-19 as cases escalate.

The National Virus Reference Laboratory has the ability to process 600 tests a day, but national capacity will increase substantially by the end of this week.

Prof Liam Glynn, professor of general practice at the University of Limerick, said Ireland was on the same trajectory as Italy a fortnight ago, but intervention on testing meant the country was more likely to follow South Korea, with less cases and fatalities.

He tweeted: “We will get worse [due to more testing] but then can #FlattenTheCurve like South Korea AND SAVE LIVES. Be a hero and play your part.”

Anyone with a new fever of 38 degrees or more, or chills and/or respiratory tract infection including cough will require testing, public health specialists are advising.

The test is similar to a flu test with swabs taken from the nose, throat, or sputum (mix of saliva and mucous). It currently takes between 24 and 36 hours between the sample being taken and results being delivered to the patient.

There are no issues, it is understood, with availability of test kits. Some 1.5 million were distributed by WHO to more than 50 countries in recent weeks.