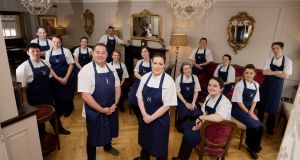 In Blacklion, Co Cavan, Neven Maguire has closed his restaurant because of coronavirus; in Belcoo, Co Fermanagh, “30 seconds over the Border, the pubs are open”.

“Surreal,” is how Maguire describes it. He is chef proprietor of the award-winning MacNean House and Restaurant, which employs 75 people in the small Cavan village. On Sunday night he gathered his staff and broke the news.

“I’m heartbroken,” he says. “It was one of the most emotional days we’ve ever had. It wasn’t an easy call to make, but we want people to stay healthy, that’s the bigger picture, and people understand that.

“The staff are very sad, but we will get through this, and we will reopen. I said to them, ‘this isn’t goodbye, this is good luck and take care of yourself and each other’.”

He is one of many in the Republic who have made that decision. On Sunday the Government called for the closure of the State’s 7,000 pubs until at least the end of March; on Monday morning the Restaurants Association of Ireland appealed to the Government to shut the sector down “in the best interests of public health”.

“Blacklion is like a ghost town,” says Maguire. “We are so close to the Border, it’s defeating the purpose of closing everything on one side if everything’s open on the other. There are parents living in Cavan whose children go to school in the North, and they didn’t send them to school today.”

On the Northern side of the Border other parents are making that same decision. Catherine Doran’s daughters Charlotte (9) and Lucy (6) should have been in school in Drumahoe, Co Derry, on Monday. Instead they are at home “doing maths homework, not watching TV or playing computer games”, Ms Doran emphasises.

Ms Doran has MS. She is currently well, but is on medication which lowers her immune system. “Nobody knows how it’s going to play out with people with MS, so you just have to make the best choices you can.

“We made a considered decision which we felt was sensible for us. We’re two miles away from a different decision [in the Republic of Ireland], and two miles feels too little.”

The North’s education minister, the DUP’s Peter Weir, has stressed in recent days that it is not yet time to close schools in the North. In a letter to principals on Monday, he said he would “not be giving weight to popular opinion on social media as regards Covid-19 but instead will be following the expert clinical advice provided to me” .

Yet the voices to the contrary are growing. The SDLP and Sinn Féin have both called for schools to be closed, as has the leader of the Catholic Church in Ireland, Archbishop Eamon Martin.

A number of schools have taken their own steps. The principal of Lisneal College in Derry, Michael Allen, wrote to parents to explain that classes on Monday would be “postponed” to allow teachers time to prepare for any potential closure.

“It is evident that our political leadership cannot even agree on the best way forward,” he wrote. “The current situation we face is like no other I have seen in my lifetime. My priorities at the moment are to protect vulnerable children, staff and family members, and to prepare learning resources for our pupils.”

Others have also been making their own decisions. Some councils have closed leisure centres, civic offices and public buildings; businesses and community centres in Border areas have chosen to close, and the Belfast marathon has been postponed.

On the list of closures is the Museum of Free Derry in the city’s Bogside. Manager Maeve McLaughlin is a former Sinn Féin MLA who was chair of the Stormont health committee. She felt they had no choice but to shut to protect staff and visitors.

“The last few days we’ve been glued to news reports and social media reports, and trying to make our own judgements with our directors and our staff, and trying to do our own risk assessments and get in place remote working action plans and all of that.

“There’s no doubt there’s confusion. I’m someone who works in Derry and lives in Donegal, and I can see that people are stepping up and taking on their own responsibilities and attempting to show leadership in the best way they can. It’s a difficult situation.”

This applies on both sides of the Border. Adrian Grant is a lecturer at Ulster University who lives in Buncrana, Co Donegal. At home he has watched people “making massive sacrifices to stay indoors as much as possible and not to go out unless it’s essential”.

It is for this reason that he has chosen to work from home rather than travel to work in Northern Ireland. “I just don’t think it’s advisable. I think you have a social responsibility to make sure you’re not spreading it.”

James Huey agrees. He is the co-owner of the Walled City Brewery in Derry, a restaurant and on-site brewery. It is among a number of pubs and restaurants in the city which have chosen to close.

“We had a really busy weekend but it just didn’t feel right to me to think that one of our customers or staff could get coronavirus just by being here.

“It’s almost like two different sides of the world in terms of what’s going on down South compared to what’s going on here. There’s so much confusion and, really, it’s not helping. You’d think we’d all be on the same page, but we’re not.”