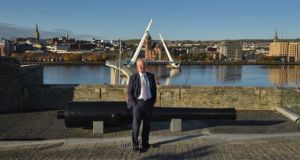 Dr Tom Black, pictured in Derry, said the decision by politicians to relax restrictions gave a message to health workers: ‘we are abandoning you’. File photograph: Trevor McBride

The North’s Minister for Health has warned that lifting Covid-19 restrictions is a “gamble” and further measures will be needed “probably” before Christmas or the New Year.

“This is a gamble, this is a risk. Do I think it’s enough? No. Will we looking for more, we will go back to the Executive probably before Christmas or the New Year asking for more steps? I firmly believe we will be,” he said.

Ministers agreed on Thursday to a one-week extension of current lockdown restrictions followed by a phased reopening of the hospitality sector after days of bitter division within the Executive.

Mr Swann had initially asked for the measures to be extended for two weeks on the advice of the North’s Chief Medical Officer, Dr Michael McBride, who warned that failure to do so would lead to “excess deaths”, but this proposal was blocked by the DUP, which used a contentious Stormont mechanism - a cross-community vote - to do so.

Mr Swann criticised the DUP’s step, saying it was “not one I would have used, it’s not one I think was the right thing to do at this time.”

The North’s Department of Health reported 11 further coronavirus-related deaths on Friday, bringing the total number of fatalities to 836. An additional 607 people tested positive for the virus.

Hospitals in the North were operating at over-capacity on Friday, the Department said, with 441 Covid-19 patients in hospital and 44 in intensive care.

Dr Tom Black, who is a GP in Derry and the chair of the representative body the British Medical Association (BMA) in Northern Ireland, warned that the response to the pressure on hospitals should have been to bring in a further lockdown.

“Yet politicians have decided to ease restrictions over the next two weeks and open up society,” he said. “That decision is incompetent and negligent and saying to the healthcare workers that ‘we are abandoning you’.

“If the healthcare workers thought that they had been betrayed by the Executive, I think that would be a reasonable stance to take,” he said.

The chief executive of the Belfast Health and Social Care Trust, Cathy Jack, said it was currently caring for 130 people with Covid-19 and non-coronavirus patients risked serious harm or death because the Trust was now at full stretch.

The Trust, she said, was enduring “uncertain and dark” days. “This is the most difficult challenge that health and social care has faced.”

Meanwhile, the political fallout continued on Friday, with the First Minister, Arlene Foster of the DUP, telling the BBC the week had been a “torturous example of how not to take decisions” and she regretted it “deeply”.

But she also accused the Deputy First Minister, Sinn Féin’s Michelle O’Neill, of trying to “isolate” the DUP, saying that at the Executive she “pushed everything to a vote. If I’d been chairing the meeting, I would not have pushed a vote until we have found consensus on the way forward”.

The Minister for Finance, Sinn Féin’s Conor Murphy, described the DUP’s use of the cross-community vote mechanism to block the Minister for Health’s initial plan for a two-week extension as “reprehensible” and said his party “would not stoop to the level that the DUP has stooped to in order to get our own way”.

“Six ministers voted in favour of the health minister’s original proposition, that’s four out of the five parties,” he told the BBC. “That should have been sufficient in order to carry it.”

Under the agreement reached by Ministers on Thursday night, cafes and close contact businesses such as hairdressers can reopen from November 20th, and the rest of the hospitality industry a week later.

The DUP, Ulster Unionist Party and Alliance supported the motion, with the SDLP abstaining and Sinn Féin voting against. Sinn Féin and the SDLP both said they could not “in good conscience” support a proposal which went against the advice of the North’s Chief Medical Officer, who recommended a further two weeks of restrictions.

The Ulster Unionist and Alliance ministers made clear they only supported it to avoid a “cliff-edge” scenario in which the legislation facilitating a four-week period of restrictions expired on Friday night.

Businesses welcomed clarity but criticised the delay in making a decision. The Chief Executive of the Northern Ireland Hotels Federation, Janice Gault said the extended six weeks of closure over October and November would cost the industry around £70 million (€78 million) in lost sales.

“From a hotel perspective, it has been a bleak month with frustration morphing into exasperation over the last week,” she said.

“The air of despondency at the start of the process has been replaced with one of disbelief and distress.”

Separate data released by the Northern Ireland Statistics and Research Agency (Nisra) on Friday morning showed that 78 deaths involving Covid-19 were recorded in the week to November 6th.

The overall death toll recorded by Nisra is now 1,141.

Nisra’s weekly data includes all deaths where coronavirus is mentioned on the death certificate by a medical professional, but the individual may or may not have tested positive for the virus.

Their figures are higher than those recorded in the Covid-19 bulletin released daily by the North’s Department of Health (DoH), which includes only those who have tested positive for Covid-19.

The number of coronavirus-related fatalities reported by the department in the same period was 772. - Additional reporting PA.