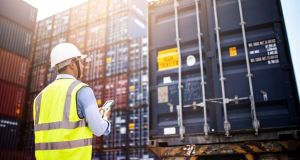 The UK is proposing a grace period for export declarations for goods moving from Britain to Northern Ireland after the end of the Brexit transition period, The Irish Times understands.

However, they accept consignments would still be subject to checks and controls.

The British government has told businesses seeking clarity on what arrangements will be on trade across the Irish Sea from January 1st that it will “become clearer in the next week or so”. The Irish Times understands that a significant amount of work remains to be done on the issue.

It follows warnings from supermarkets that the range of products in their Northern Ireland stores could be greatly reduced because of the need for checks on agri-food products arriving from Great Britain from January 1st.

Seamus Leheny from the Freight Transport Association in Northern Ireland said a grace period would be “not just welcome, it’s required, it’s needed, because especially for food, we just aren’t ready.

“We don’t have the infrastructure to deal with it, the IT systems we haven’t had sight of yet, how SPS will link in with customs, and manufacturers in GB, they have to get their packaging, labelling, pallets up to scratch for moving in here, that’s not ready.

“We’re going to need at least six months lead-in for this, so it’s not just welcome, it should be mandatory.”

Under the terms of the Brexit withdrawal agreement Northern Ireland will remain in the EU single market for goods once the transition period comes to an end but the rest of the UK will leave, necessitating checks on agri-food imports arriving from Britain.

The North’s Department of Agriculture – which is responsible for putting in place the necessary facilities – has already warned that the infrastructure required to check goods arriving at Northern Ireland’s ports from Britain will not be ready in time for the end of the transition period.

Earlier this week the North’s First and Deputy First Ministers, Arlene Foster and Michelle O’Neill, wrote jointly to the European Commission emphasising supermarkets’ concerns that there was a “real threat to the continuity of the supply” of food and other products.

This, they said, had left Northern Ireland in an “unacceptable situation”, and appealed for an “agreed approach” to be found.

Responding to the letter, a Commission spokesman said it was taking the warnings “very seriously”, and discussions were continuing with the UK.

Mr Leheny said he believed the EU was “sympathetic” to the idea of a grace period. “I think they do get this and they don’t want to be seen to punish consumers here and businesses, they want to work with us, and what we’ve said to them is that at the end of the day we need to make the Northern Ireland protocol work for its long-term longevity.”

Northern Ireland, he said, had been “used in the negotiations by both sides, that is why we aren’t ready,” but the need for a temporary waiver would increase pressure on the UK to secure a trade deal with the EU and could give businesses much-needed clarity.

“It’ll be part of an all-encompassing deal, and what that will mean is that there will be legal parameters where the UK will have to set down how it will eventually implement the checks … it just means we will have a clear plan,” he said.

A UK government spokesperson said the UK and the EU “have committed to an intensified process of engagement to resolve all outstanding issues with the implementation of the Northern Ireland Protocol which includes securing the flexibilities we need for trade from GB to NI.

“This is particularly important for supermarkets, where we have been clear specific solutions are required.

“We will continue to work closely with the Northern Ireland Executive as discussions continue with the EU through the Joint Committee process,” the spokesperson said.