Vaccine nationalism will put poorest countries at back of the queue 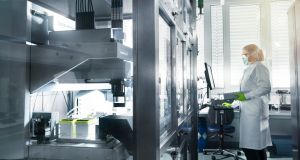 A BioNTech laboratory in Mainz, Germany. The vaccine developed by BioNTech, a European company founded by a German couple of Turkish origin, will be distributed by Pfizer. Photograph: BioNTech SE/EPA

The Covid-19 pandemic has produced a level of cross-border collaboration that was once unimaginable. Barriers to international co-operation have come down, rivalries have been set aside, information has been freely shared and the protagonists have taken a genuinely global approach to the fight against the disease.

Unfortunately, this describes only part, albeit a very important part, of the global response: that of the world’s scientists. Their internationalist spirit has been a remarkable feature of the pandemic. More than 200 clinical trials are under way for vaccines and therapeutic treatments, bringing together hospitals and research centres across the world. Viral genome sequences have been shared widely, data has been published on free-to-access online portals and institutional partnerships – helped by a flow of vast research funding – have flourished, uninhibited by linguistic or geographic barriers.

To some governments, the global push for a vaccine has become an extension of geopolitical competition, turning the scientific quest into a type of space race

The Pfizer vaccine, which the pharma giant this week reported was 90 per cent effective in the latest stage of its clinical trial, is a good example. The vaccine was developed by BioNTech, a European company founded by a German couple of Turkish origin. Its distributor, Pfizer, is an American firm which plans to manufacture the vaccine and oversee the operation from bases across the world, including in Ireland.

Yet the Pfizer vaccine is simultaneously a case study in how states, unlike the scientific community, have prioritised their own narrow interests throughout the pandemic. Pfizer has said it can produce up to 50 million doses by the end of the year and up to 1.3 billion more in 2021. But at least 500 million doses – enough to vaccinate 250 million people – have already been reserved by rich countries including the US, the EU, Canada, Australia and the UK, and that figure could rise to more than one billion through advanced purchase agreements. This reflects a wider pattern: powerful states have used their financial muscle to jump to the head of the vaccine queue, with some amassing portfolios of potential vaccines that, if authorised by health regulators, would give them stocks larger than their population size.

To some governments, the global push for a vaccine has become an extension of geopolitical competition, turning the scientific quest into a type of space race. Within hours of Pfizer announcing its news this week, Russia claimed its state-sponsored Sputnik vaccine to also be 90 per cent effective. China has reportedly made its leading vaccine candidates available for use in limited circumstances. The Trump administration has shown little interest in sharing vaccine stocks and has refused to join Covax, a global initiative involving the World Health Organisation designed to equitably distribute billions of doses by pooling funding to invest in leading vaccine efforts. So far the vaccine race has followed a similar pattern to the competition for PPE and ventilators earlier in the pandemic, when states banned exports (Germany, the Czech Republic), requisitioned products (France) or invoked wartime laws to impose production contracts on producers of medical equipment (the US).

Covax aims to procure enough vaccines to enable participating countries to immunise at least 20 per cent of their populations. For wealthy states, that can serve as an insurance policy if other vaccine investments don’t come off. For low-income countries, it may be the only way to avoid having to wait years for the Covid-19 jab. Pfizer is not part of Covax; there is an “expression of interest for possible supply” but even if a deal were struck tomorrow it’s not clear that many doses would be available for the foreseeable future.

The picture is blurred by still more unanswered questions. It’s not known which countries, under these advanced purchase agreements, will receive the first batches of any vaccine or how the order of precedence will work. The developing world could be disadvantaged by logistical challenges; the Pfizer/BioNTech vaccine must be stored at -70 degrees, so states that lack sub-zero refrigeration capacity and rapid supply lines will struggle to distribute it.

The moral argument for equitable distribution is clear; vulnerable people should receive vaccines first, wherever they happen to live. But there is also a selfish case to be made for sharing: in a globalised world where people are more mobile than ever, countries benefit from having other countries vaccinated because it makes it less likely that the virus will spread to them.

None of this is peculiar to the current crisis. The world has never had a mechanism to distribute drugs on an equitable basis, and in hindsight the outbreak of the H1N1 swine flu in 2009 was a warning of the problem that is now playing out on a much wider scale. Then, the United Nations-sponsored plan to get governments to share vaccine doses fell short after rich states failed to make good on their commitment to put aside 10 per cent of their stockpiles for developing countries. In the case of H1N1, the outbreak petered out before a vaccine became essential, and the tensions it revealed were soon forgotten. So the warning went unheeded. And now those least equipped to fight the virus are going to pay the highest price.