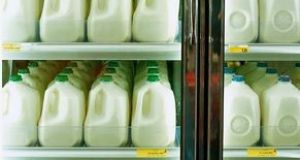 “Put simply, dairy processors and their farmers will not survive unless there is a deal.” Photograph: Getty Images

Dairy producers in the North have said they will be unable to process all their milk in the event of a no-deal Brexit, leaving hundreds of millions of litres without a home and making a cull of the herd likely.

At present 35 per cent of the region’s milk pool is processed at facilities in the Republic, a scenario that could come to a sudden halt with serious consequences for those working in the sector.

“If we crash out on October31st we do not have the capacity to process all the milk that will be produced, and we will not be able to afford to pay EU tariffs or navigate the EU certification requirements such that we can process that milk in the Republic,” said Dairy Council NI on Monday, in a bleak synopsis of what might follow the political inability to broker an agreement.

“Put simply, dairy processors and their farmers will not survive unless there is a deal.”

It believes that in a situation where southern processors are no longer accessible they would be left with about 600 million litres of raw milk. The sector currently supports more than 3,000 farm families.

Dairy Council NI chief executive Dr Mike Johnston said that based on its calculations, trade tariffs emerging from no deal on all milk products moving from Northern Ireland to the EU would total £320m (€359m).

“This tariff represents 25 per cent of the value of our entire industry. In a sector where the margin is, at best, 3 per cent or 4 per cent, trade tariffs of that magnitude would wipe out the industry.

“The reality is stark for farmers. Our analysis suggests that the milk price paid to farmers would fall by over 10 pence per litre from its current base should such tariffs be imposed.”

He said dairy farmers would do what they could to mitigate the situation such as dumping excess milk in slurry tanks and spreading it on land. However, the last thing farmers wanted to do was to cull the herd – a “doomsday scenario” that may end up being the only option.