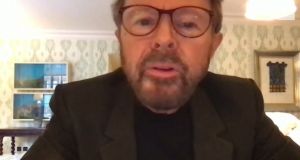 Bjorn Ulvaeus has previously spoken out in support of the #MeToo movement, and has criticised the election of president Donald Trump

Abba singer Bjorn Ulvaeus has come out in support of young climate activist Greta Thunberg, in a video posted online in recent days.

The Swedish pop singer said “the patriarchy is pissing in their pants in fear” of Ms Thunberg, a 16-year-old Swede who started a global school climate strike movement.

The teenager has become an icon of climate change activists after her decision to strike from school alone outside the Swedish parliament last year, in protest over the lack of action in tackling the climate crisis.

“She drives some people, mostly men, crazy, and I find it difficult to understand where that anger comes from,” Mr Ulvaeus said.

“Young people need role models, and as such, Greta is a blessing in the world of influencers and reality TV stars,” he said.

“You have to admire her guts and her focus, it’s a monumental achievement to create a global mass movement from scratch in such a short time,” he said.

Mr Ulvaeus has previously spoken out in support of the #MeToo movement, and has criticised the election of president Donald Trump in America, and Britain’s vote to leave the European Union.