Time-over-distance and variable speed limits should be considered 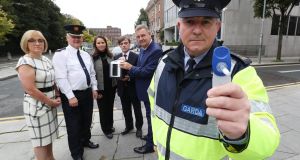 Double penalty points for motorists who break the rules of the road at high-risk times such as bank holiday weekends and other public holidays has been suggested by the State’s head of roads policing.

Speaking in Dublin at the Road Safety Authority’s academic lecture, which marked the start of Road Safety Week, Assistant Commissioner David Sheahan said other jurisdictions, such as Australia, had put innovative schemes into place.

The double points period applies from midnight of the start date to midnight on the finish date.

Mr Sheahan said such a system could be looked at in an Irish context where penalty points are currently the same every day. “Maybe this is something we need to change,” he said.

Mr Sheahan said Ireland had a decision to make about its culture, whether people wanted to have a culture which saved lives, or where people were prepared to accept that what we do “is very different” to what is said.

He said, “We need to look at graduated penalties for people with multiple drugs in their systems” and a range of measures including variable speed limits, and average time-over-distance speed limits.

Variable speed limits have been suggested for Dublin’s M50 to reduce speed at times of congestion or a traffic incident.

Time-over-distance or average time speed limits entail a vehicle being photographed and timed when entering a particular zone and photographed coming out the other side. If the distance and time show the vehicle could not have kept to the speed limit a fixed charge penalty notice is served on the motorist – as is the case in the Dublin Tunnel.