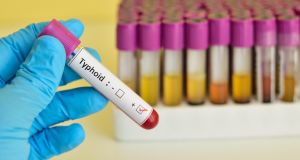 Last year, Ireland East Hospital Group contacted up to 70 people who were treated at Wexford General Hospital at the same time as a patient confirmed as having typhoid fever. File photograph: Getty

Typhoid is making an unwelcome return to Ireland this year, thanks to a big increase in cases among travellers returning from Pakistan, according to the Health Service Executive.

Worryingly, too, cases of largely drug-resistant typhoid fever have been reported in Ireland for the first time, says the HSE’s Health Protection Surveillance Centre.

So far this year, there have been 23 cases of the water-borne infection, 12 of which involved recent travel to Pakistan. This is well above the typical average of nine cases a year – including just two from Pakistan – seen before this.

Typhoid fever is caused by a salmonella bacterium that spreads through contaminated food and water. It typically causes fever, headache, nausea and severe loss of appetite. In rare cases, it can be fatal.

Though common in many developing countries, it has generally been treated with antibiotics. However, since 2017, the government in Pakistan has been battling a rise in XDR cases in Sindh province; these are resistant to most front-line antibiotics.

Last year, Ireland East Hospital Group contacted up to 70 people who were treated at Wexford General Hospital at the same time as a patient confirmed as having typhoid fever.

The hospital group said the people who had been contacted may have used the same toilet facilities as the patient concerned, but added the risk of “further contagion” had been assessed as low.

Typhoid outbreaks in Dublin were relatively common up to the early 20th century due to poor sanitation.