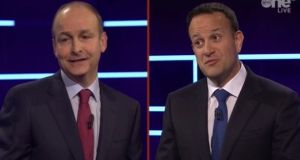 Fianna Fáil leader Micheál Martin and Fine Gael leader Leo Varadkar: the reaction of both parties illustrates the gulf that still exists between them, even as they stand on the cusp of a historic coalition.

It is, as one Government figure put it, a “nonsense row” but the skirmish between Fianna Fáil and Fine Gael over contingency planning for an election reveals the distrust that lingers between the traditional rivals of Irish politics.

If this is a “guide to what the actual coalition will be like”, the source added, “then it will be a mess with dysfunction and distrust right at its heart”.

The fact that officials in the Department of Housing are preparing a contingency plan for elections in the era of coronavirus is entirely sensible. Serious questions would be asked if, in a few weeks’ time, attempts to form a government collapsed and no such plan was in place.

Yet the reaction of both parties to what should be a fairly straightforward issue illustrates the gulf that still exists between them, even as they stand on the cusp of a historic coalition.

The disclosure of the contingency planning in The Irish Times angered Fianna Fáilers who believe Fine Gael is dragging out the government formation process with a view to calling another election later this year.

This feeling was almost certainly behind Barry Cowen’s claim that Fine Gael is acting in “bad faith” and putting “party before country”. Another Fianna Fáiler privately acknowledged yesterday that it makes sense for such contingency plans to be made – before adding that Micheál Martin’s party should have been told about them.

Fine Gael Ministers claimed the aggressive statement released by the party yesterday was a result not just of Cowen and Thomas Byrne’s weekend comments, but what they see as weeks of Fianna Fáil sniping at the Government as it deals with the coronavirus crisis.

“If you want to form a partnership government of equals, treat us and the people with a little respect,” said one Minister.

Fianna Fáil says it is doing what it should as an Opposition: making constructive suggestions and critiquing Government policy where necessary.

As a perfect encapsulation of the misunderstanding, Byrne’s scrutiny of Leaving Certificate plans in recent weeks is seen by Fianna Fáil as necessary Opposition politics while some in Fine Gael claim he was overly aggressive.

Neither Fianna Fáil, Fine Gael or the Greens are overly enthused about coalition and there is concern about how internal disputes will be managed if and when this mooted government takes office. Varadkar likely felt it necessary to take a tough line over the weekend to appease those in Fine Gael opposed to entering government. Other potential difficulties lay ahead, too.

Michael Creed, the Minister for Agriculture, yesterday casually suggested that the Green Party is pursuing its key goal of reducing carbon emissions by an average of 7 per cent per year for “political expediency”. Some targets would also be “particularly problematic” for agriculture, he said.

Fianna Fáil’s Darragh O’Brien and Michael McGrath yesterday said the talks will intensify this week, with all sides hopeful a government can be formed next month.

But if such a bitter row can flare up over something so relatively small – and at a time in the courtship when parties are supposed to be nice to each other – then as much work is needed on improving relationships as drafting policy.