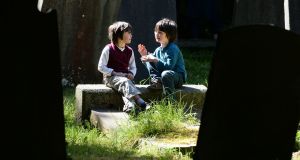 When the non-denominational Goldenbridge cemetery was first opened in 1828 by Daniel O’Connell the Liberator, the two-acre site cost £600.

Today the price for a grave, one of 500 available in the reopened and rededicated cemetery in Inchicore, Dublin, starts at €2,175.

A further 150 “gone over graves”, which had previous occupants though none for the past 149 years, are also available to the local community.

Anyone seeking to bury a loved one in the cemetery will have to use a headstone and materials in keeping with the style and era of the originals, as part of the conservation ethos of Glasnevin Trust, which runs the newly reopened historical landmark.

Its chairman John Green told some 250 people at the rededication of the cemetery on Sunday that the most important grave in the cemetery is that of WT Cosgrave, first head of government of the Irish Free State.

His son, former taoiseach Liam Cosgrave (97), attended the rededication and formal reopening of the cemetery that Daniel O’Connell had campaigned for.

Mr Cosgrave, whose wife Vera Cosgrave was buried in Goldenbridge last September, said after the ceremony that “I’m very glad, very pleased to see it reopened. It’s a quiet cemetery.”

Frank Burke, a member of the Irish Volunteers and a step-brother of WT Cosgrave, is also buried there as is Mary Anne Jenkins a member of Cumann na mBan and Eugene Lynch an eight-year-old child killed during the 1916 Rising.

The annual commemoration of O’Connell, whose 170th anniversary is on Monday was also marked. Wreaths in his honour were laid by a number of people including Minister of State for Communities Catherine Byrne and by the Liberator’s great, great, great grandson John Cunningham.

Ms Byrne spoke of the bloodhounds that once patrolled the graveyard at night to prevent grave robbers from stealing bodies for medical students to practise on. And she spoke of the challenges caused by vandalism and drug addicts using the cemetery in present times.

Chief executive of Glasnevin Trust George McCullough said the site had to be decontaminated five times because of the needles and other drugs paraphernalia found on the site. He said the suppliers of the drugs used the graveyard as a “store, armoury and vault” for their drugs, guns and money.

Jim Roche, best known for his re-enactments of Pádraig Pearse’s O’Donovan Ross graveside oration at Glasnevin cemetery, reenacted an extract from O’Connell’s speech when the cemetery opened 189 years ago.

From the time of the Reformation, Catholics were not allowed their own cemeteries and buried their dead in old churchyards, monasteries and Protestant churchyards. O’Connell campaigned for a cemetery to be opened in the wake of the Penal Laws, to “those of all religions and none” and Goldenbridge was the result.

UCD professor of history Maurice Bric told those at the ceremony that the Protestants of Jews of France and Spain looked to O’Connell’s campaign for Catholics in Ireland as inspiration for themselves that they could “as Protestants, be loyal citizens and servants of a Catholic state”.

St James’s Brass and Reed Band performed at the original opening of Goldenbridge. Their successors in the same band performed at Sunday’s event, playing songs including God Save Ireland and A Nation Once Again.