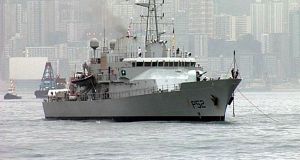 The LÉ Niamh had informed the Italian coastguard it was too dangerous to proceed to the vessel as it was too close to the Libyan coast, according to extracts of recordings cited in evidence during a trial in Palermo, Sicily.

Tensions between the Italian coastguard and a Naval Service patrol ship have emerged during a trial of three Libyan men accused of people trafficking in the Mediterranean.

The exchanges have led to a call for “clarity” from Government for future Irish rescue missions.

The European Network Against Racism (ENAR) Ireland called on the Minister for Defence to “provide the Naval Service with the operational clarity it needs to carry out rescue missions swiftly and without hesitation”.

The Naval Service has so far saved 15,621 lives since deployment of ships to the Mediterranean in May 2015 under a bilateral arrangement with Italy.

The LÉ Eithne, which was ready to return to the Mediterranean on May 1st this year, is awaiting Government approval to sail south.

The case before a court in Sicily involves three men who were arrested after the LÉ Niamh and Medecins Sans Frontieres (MSF), along with several other vessels, rescued almost 400 people from an overloaded boat believed to be carrying at least 600 people off the Libyan coast on August 5th, 2015.

A total of 25 bodies were recovered, but up to 200 people are believed to have drowned.

The LÉ Niamh had initially informed the Italian coastguard it was too dangerous to proceed to the vessel as it was too close to the Libyan coast, according to extracts of recordings cited in evidence during the trial in Palermo, Sicily, last week.

Cdr Ken Minehane of the LÉ Niamh told the Italian coastguard that his orders from “Dublin” were to stay at least 25km from Libya for safety reasons.

The vessel in difficulty was 20km off Libya at time of the alert.

“You must understand that we cannot put the crew of this ship in danger by entering too close to the Libyan coast,” said Cdr Minehane.“The danger we feel in this area is that people coming out from the Libyan coast in vessels with weapons trying to endanger our ship’s company.”

The overloaded wooden barge was still afloat when the LÉ Niamh and MSF’s Dignity 1 reached it and only capsized after rigid inflatables had been launched and migrants rushed to one side, according to reports at the time.

MSF field co-ordinator Juan Gill, aboard Dignity 1, said it was a “very distressing situation” and those who died may have been forced to travel below deck as they had paid lower fares.

The crew of the LÉ Niamh, who already had more than 240 people aboard from an earlier incident, rescued some 210 people, including 35 children, transferred another 312 people to the Dignity 1 and retrieved 14 bodies from below deck.

The fatalities were the first and the overcrowding was said to be the worst since the Naval Service Mediterranean humanitarian rescue mission had begun earlier in 2015 .

“The Irish public have rightly been proud of the Naval Service’s role in saving so many lives in the Mediterranean. However it is distressing to listen to the recording of the exchanges between the Italian coastguard and the LÉ Niamh, knowing that so many lives were hanging in the balance,” he said.

The Department of Defence said it had no comment. The Defence Forces Press office said it would be “inappropriate” to comment further while the matters raised were the subject of court proceedings.