Dublin finish: Runner completes 44th marathon in as many days

Peter Thompson raises over €22,000 so far on his running tour of all European countries 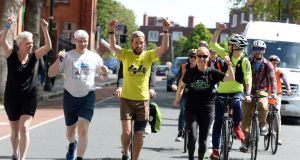 Dublin was the last stop following a gruelling feat of physical endurance for British man Peter Thompson as he completed his 44th marathon in as many days on Sunday.

The 32-year-old mental health advocate from Bournemouth arrived to a rapturous reception at the Market Bar in Georges Street Arcade on Sunday afternoon as he rounded off a tour of every European country, which involved running almost 2,000km in less than a month and a half.

Thompson has so far managed to raise £17,000 (€22,000) for mental health charities due to his exploits on the marathon circuit, but he believes a more vital aspect was raising awareness of support organisations across the sector.

Asked what his overriding feeling was having completed the 44-day adventure, Thompson described his “relief and excitement” at finally having made it to the finishing post.

“It doesn’t feel like it’s about me, it feels like it’s about so many other people. And that’s what got me to the finish line because if I stopped it would have affected other people, and I wanted to show people that you can achieve things,” he said.

The continental tour began with lost luggage and freezing temperatures in Russia at the beginning of last month, but Thompson was soon running in 28 degree heat in Greece, and managed to get himself lost in Moldova before almost giving up in Andorra towards the very end.

Despite the punishing physical exertion of running so many miles in so few days, he revealed that the logistical challenges and sleep deprivation were the most difficult aspects of the entire experience.

“There was buses that didn’t run where we’ve had to travel through the night. I got lost in Moldova and I ended up travelling for 19 hours and running in two marathons over a 35-hour period,” he said.

His Dublin route began in Dún Laoghaire shortly after midday followed by a coastal run up to Howth peninsula and back to the city centre for the finish line.

Sipping a first ever pint of Guinness during his maiden visit to Ireland, the extreme athlete says he is now looking forward to spending time with friends and that he “craves normality” as he embarks on a well-earned rest period of two weeks before returning to work at a social inclusion service.

Donations in support of Peter Thompson’s marathon runs can be made at MarathonsForTheMind.com.