No plans to combat sharing of coronavirus misinformation on WhatsApp 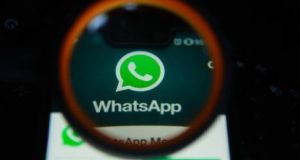 The Defence Forces was forced to clarify that it was not going on ‘red alert’ in response to widely-circulated messages that it had done so. Photograph: Getty Images

Facebook has no plans to roll out specific features to combat recent sharing of misinformation relating to Covid-19 on WhatsApp, the digital messaging platform owned by the US social networking giant.

A spokeswoman for the company pointed to several features that it has rolled out in recent months to combat misinformation, but no extra measures are planned.

“Recent product changes include reducing the number of people you can forward a message to just five chats at once and introducing the ‘forwarded’ and ‘highly forwarded’ labels to highlight when something has been shared multiple times,” the company said in a statement.

The sharing of misinformation on WhatsApp, often in the form of a forwarded text, video or voice message, has been widely criticised in recent days as the State ramps up its response to the Covid-19 outbreak.

The Defence Forces was forced to clarify that it was not going on “red alert” in response to widely-circulated messages that it had done so, and the Taoiseach Leo Varadkar, has tweeted to urge people not to share dubious WhatsApp messages.

He said people should get information from official, trusted sources.

The Facebook spokeswoman added the company is seeking to shut down spam accounts, using machine learning technology to ban accounts that send bulk or automated messages, which has led to the suspension of 2 million accounts per month.

Experts have said that the structure of WhatsApp, which heavily encrypts content, making it inaccessible, even to its developers, makes it more challenging to police misinformation than on social media platforms like Facebook or Twitter.

Liz Carolan, who leads the Transparent Referendum Initiative (TRI), which studies misinformation and political communication on social media, said Facebook and Instagram (also owned by Facebook) have been proactive in shutting down “dangerous lies and attempts at Covid-19 related fraud”.

“The way that WhatsApp is built makes it hard for anyone - including the company - to monitor what is spreading, to stop or warn people about misleading content, or to promote good quality and official sources of information.”

She advised people should be careful about what information they trust. “Much like we are all taking responsibility for protecting ourselves and others from Corona Virus, we can all do things to prevent the spread of disinformation online.

“We can stop ourselves from being vectors for panic inducing lies by not forwarding things that are based on rumours, and we can “inoculate” ourselves by checking reputable sources for information - the HSE obviously, but also trusted media sources. Fake news often fills an information vacuum,” she said.

The company is also removing content with claims and conspiracy theories that have been debunked by the WHO or other health experts.

“We’re focusing on claims where, if someone relies on the information, it makes them more likely to get sick or not get treatment. This includes claims related to false cures or prevention methods - like drinking bleach cures the coronavirus - or claims that discourage treatment or create confusion about health resources that are available,” the spokeswoman said.