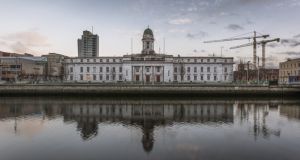 Cork City Hall: the Lord Mayor said he was glad the city council was supporting the book. Photograph: iStock

Nine men who survived 94 days on hunger strike as part of the fight for Irish independence have been recognised in a new book telling their story.

Lord Mayor of Cork Joe Kavanagh said that the book The Nine Survivors by local historian Conor Kenny and his cousin Claire Cronin was an important tribute to the nine men who survived the hunger strike in Cork Gaol in 1920.

“1920 was a year of profound importance in Ireland’s history. Our ancestors lived through a tumultuous year of escalating violence, tension, and distrust,” said Cllr Kavanagh in advance of the launch of the book.

“The Nine Survivors: A Story of the 94 day Record Hunger Strike” tells how 60 Republican Prisoners, who were held in Cork Gaol awaiting trial by the British, went on hunger strike on August 11th, 1920 in protest seeking political status.

They were joined a day later by the Lord Mayor of Cork, Terence MacSwiney after his arrest at Cork City Hall and although MacSwiney was transferred to Brixton Prison, he persevered with his protest until his death on October 25th.

Back in Cork, two members of the protest, Comdt Michael Fitzgerald from Fermoy and Volunteer Joe Murphy from Pouladuff also died on hunger strike on October 17th and October 25th.

Most men came off the hunger strike but nine men persevered with their protest and only ended it on November 12th, after some 94 days when they were persuaded by Sinn Féin leader Arthur Griffith to give up.

Cllr Kavanagh said that Joseph Kenny’s descendants, Conor Kenny and Claire Cronin had done a great service by researching and bringing the story of the nine men to life and it was a fitting tribute to them 100 years on.

Ms Cronin said: “My grandfather, Joseph Kenny was the was the oldest of the nine survivors – he was 43 at the time and a father of seven when he was jailed and my mother was actually born when he was in jail on hunger strike.

“My mother had all his papers and about two years ago, with the centenary coming up, we started researching the hunger strike because we realised there was nothing about it because the nine survivors just fell between the cracks.”

Like Claire Cronin, Ann Crowley is proud of her grandfather, Peter Crowley, who was just 20 when he joined his older brother, John and fellow Ballylanders men, Michael O’Reilly and Chris Upton on the hunger strike.

Cllr Kavanagh said: “I am delighted Cork City Council is supporting this book as part of its 1920-2020 Centenary Commemoration Programme which aims to give us a deeper understanding how Irish society was shaped by our past.

“Thanks to Conor Kenny and Claire Cronin, this new book shines a light on the men who survived that historic hunger strike here in Cork, exploring the sacrifices they made and the courage it took to fight for Irish independence.”