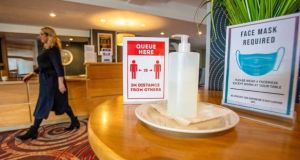 Hand sanitiser in the reception area at the White Horse Hotel on the outskirts of Derry on November 5th. Photograph: Paul Faith/Bloomberg

It is likely that the new, more infectious strain of coronavirus is already present in Ireland, the North’s First Minister has warned.

Arlene Foster told the BBC’s Good Morning Ulster programme that it was “probable” that the virus was already present in Northern Ireland, adding that “when we look at the way in which there’s a rapid growth, for example, in the Republic of Ireland in their R number, it’s probably likely that it’s in the Republic as well.”

However, Ms Foster said that she could not yet say “definitively” that the virus had been identified in the North.

“At the moment there are four cases which have been identified which have a different sequencing than other cases, the evidence from those cases has been sent to England for analysis and we await to hear whether they are the new variant,” she said.

“So, the variant has not been confirmed as being here, but we are obviously very concerned ... we await to hear that confirmation,” she said.

Ms Foster also defended the decision not to introduce a ban on travel from Great Britain at an emergency meeting of the Executive last night. Discussions are continuing today.

“Of course, there is a travel ban ... that covers about 17 million people in England, so therefore those people cannot come to Northern Ireland, they are in the most infectious area, and that has been the assessment made by the UK government,” Ms Foster said.

“In terms of a travel ban for the rest of Great Britain, of course it’s not a simple matter, there are downsides, consequences, and we’ve already heard about some of the issues at Dover at present and the fact is that we’re at the end of a very long supply chain ... as well as that there are contractual issues, there are compensation issues.”

She said these points were being considered by the North’s Attorney General, by the solicitor’s office at the Executive Office, and by the Department of Health.

The North’s Minister of Health, Robin Swann, is to consult the Attorney General on Monday about the legality of a travel ban under the Public Health 1967.

He is due to make a statement to the Assembly later.

The North’s Department of Health (DoH) announced on Monday that seven more people with coronavirus have died in the last 24 hours with a further 555 testing positive for the virus.

There are now 446 people receiving treatment for coronavirus in the North’s hospitals, with 30 in intensive care.

Meanwhile, The Northern Ireland Executive has agreed to reduce the five-day Christmas bubbling arrangements to just one day.

The relaxation of Covid rules to allow three households to gather together will now be limited to Christmas Day.

But flexibility will be afforded to people working on December 25th to enable them to bubble on another day over the festive break.

The decision was made by Stormont Ministers during an emergency virtual executive meeting late on Sunday night.

Ministers also debated the potential of a temporary ban on travel from Britain to Northern Ireland in response to the new variant of Covid-19 that has taken hold in other parts of the UK.

No decision was taken during Sunday night’s exchanges, with Ministers expected to return to the issue on Monday.

Sinn Féin supported the move however practical issues were raised around how quickly such a ban could be introduced, given the time it would likely take for the Department of Health to draw up regulations to bring it into effect.

The DUP position was that UK internal travel is already banned from Tier 4 areas in England, so there is no need for added Stormont legislation to enforce that.

The party believes the responsibility for stopping flights and ferries within the UK is an issue for the UK government and has also raised concern that Stormont could leave itself open to compensation liabilities if it was to legislate on the issue.

It is understood the Department of Health is to seek further legal advice on the issue ahead of the executive resuming discussions on Monday.

On Sunday, another 13 deaths and 505 new cases of the virus were reported.

The first week of the measures will see the toughest lockdown yet in Northern Ireland, with a form of curfew in operation from 8pm, shops closed from that time and all indoor and outdoor gatherings prohibited until 6am. – Additional reporting: PA