Tánaiste says ‘inclusive and respectful’ tone must return to the commemorations 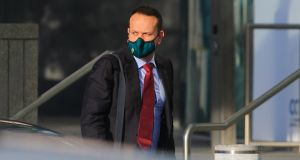 Tánaiste Leo Varadkar has suggested that “we have lost our way” in relation to the commemorations marking the decade of centenaries.

Mr Varadkar suggested that the commemorations up to and including the Easter Rising centenary in 2016 had been marked in an “inclusive and respectful” manner.

“Ceremonies were non-partisan. We commemorated what happened, sought to understand it, contextualise it, learn from it,” he stated.

“Ceremonies were inclusive and respectful. They did not seek to challenge or change anyone’s loyalties. The violence of the period was recognised but was not glorified.

“I think in the last year we have lost our way and we need to find it again. The decade of centenaries is not over.”

In the opinion article published in The Irish Daily Mail, Mr Varadkar accused Sinn Féin of distorting the facts of Irish history.

In reference to Sinn Féin TD Brian Stanley’s comparison between the Kilmichael ambush of 1920 and Narrow Water in 1979, Mr Varadkar suggested that Sinn Féin was involved in employing a “dangerous moral equivalence to normalise political violence in their pursuit of power on both sides of the border.

“There is a profound difference between the War of Independence fought then and the campaign of violence waged by the Provisional IRA in modern times.

“The War of Independence had democratic legitimacy. The IRA of 100 years ago answered to a civilian government and a democratically elected Dáil presided over first by Cathal Brugha, then Eamon de Valera and Arthur Griffith.

“The violent campaign of the Provisional IRA did not command widespread public support north or south and its political wing was rejected again and again at the ballot box.

“Furthermore the provisionals and Sinn Féin did not recognise our democracy. They refused to accept the legitimacy of our democratic institutions - our courts, gardaí, defence forces, the Constitution, even the Dáil itself which they boycotted. They dismissed the millions of votes cast by the Irish people.

“This cannot possibly be explained away as standing up to the British government or defending marginalised Catholic communities.

“Others like John Hume did so peacefully and achieved much more including civil rights.”

Mr Varadkar pointed out that many parties in Ireland, including his home, can trace their origins back to the revolutionary period. General Richard Mulcahy, the chief of staff of the IRA, became Fine Gael leader in the 1940s.

He said the “constant glorification of past violence” by Sinn Féin will only serve to make a united Ireland harder to achieve.

He added that it also threatens the spirit of decade of centenaries as we face into the most difficult part with the centenaries of Northern Ireland, the Truce and Treaty and the Civil War coming up.

In the article Mr Vardakar said he had accepted the apologies of Brian Stanley in relation to a tweet sent in 2017 which had been about him and was construed as being homophobic.

However, Mr Varadkar expressed frustration that he had not been allowed to ask questions of Mr Stanley following the Sinn Féin’s apology in the Dáil on Tuesday.