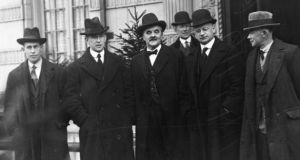 Following in the steps of Cork’s martyred Lord Mayors, Tomás MacCurtain and Terence MacSwiney was no easy task but Donal Óg O’Callaghan rose to the challenge and never more so than in the aftermath of the Burning of Cork 100 years ago this weekend, according to a leading academic.

Dr Aodh Quinlivan of the Department of Government and Politics at UCC has published his study of O’Callaghan entitled, “Forgotten Lord Mayor - Donal Óg O’Callaghan 1920-1924” in which he charts how O’Callaghan was chosen to succeed MacSwiney as Lord Mayor of Cork in November 1920.

“O Callaghan grew up on Peacock Lane on Cork’s northside and like Mac Curtain and Mac Swiney, he attended the North Monastery - he was reared in a strong Republican tradition and was involved in the Ancient Order of Hibernians, the Gaelic League, the IRB, the Irish Volunteers and Sinn Féin.

“He was very disappointed at the failure of the Cork Volunteers to participate in the 1916 Easter Rising but he helped revive the fortunes of Sinn Féin in Cork city in the following years though, unlike MacCurtain and MacSwiney, he did not contest the local municipal elections of January 1920.”

Dr Quinlivan explained that O’Callaghan won a seat on Cork Corporation through an uncontested by-election in March 1920 but just eight days after his first Corporation meeting, the newly elected Lord Mayor of Cork, Tomás Mac Curtain was murdered in his home in Blackpool by a group of RIC men.

Also elected in a by-election to Cork County Council in June 1920, O’Callaghan deputised on Cork Corporation for Mac Curtain’s successor as Lord Mayor, Terence Mac Swiney when he was arrested by the British in August 1920 and went on hunger strike in protest.

Dr Quinlivan said that O’Callaghan, a close friend of both MacCurtain and MacSwiney, provided strong leadership in Cork upon his election as Lord Mayor, following Mac Swiney’s death in Brixton Prison on October 25th 1920 after 74 days on hunger strike.

He said that O’Callaghan issued a statement mourning the death of MacSwiney: “The Republican hold on the Municipal Chair of Cork ceases only when the last Republican in Cork has followed Tomás MacCurtain and Terence MacSwiney into the grave. Death will not terrorise us”.

According to Dr Quinlivan, O’Callaghan was just five weeks in office when drunken Auxiliaries went on the rampage in Cork on the night of December 11th/12th, setting fire to the heart of the city and causing £20 million worth of damage in retaliation for an IRA ambush near Dillon’s Cross.

“He walked with Sinn Féin TD, Liam de Roiste through the rubble of Cork on the morning after, which led de Roiste to write that Cork had suffered “a night of terror and destruction” when so much of the city were destroyed and what was left was “a scene of desolation and frightfulness.

Fearful for O’Callaghan’s safety, de Roiste organised later in December for O’Callaghan to be smuggled aboard the ship, West Cannon to the United States where he quickly made an impact as a witness to what had happened in Cork when the city was burnt by Auxiliaries, said Dr Quinlivan.

“It was in America that O’Callaghan really shone - he gave evidence before the US Commission on Conditions in Ireland and most of that was about the burning of Cork, which he very definitively blamed on the Crown Forces in Ireland and he proved very much a star witness.

“He gave evidence over two days and he was greatly praised, particularly in terms of how well prepared he was because he came with masses of paperwork, by the chairman of the Commission, Levi Hollingsworth Wood who was very impressed with him and his evidence,” said Dr Quinlivan.

“And that’s reflected in the Commission’s report which was published in Washington in 1921 - the Commission obviously summarised the evidence and testimony that was provided by people but they more or less reproduced O’Callaghan’s testimony in total.

“The Commission generated a lot of newspaper headlines particularly in the US and while the British side rubbished it because it was a pretty one sided affair, it did build up support and certainly hardened opinion in the US for the cause of Irish freedom and O’Callaghan was central to that.”