Burning of Cork by British forces in 1920 remembered 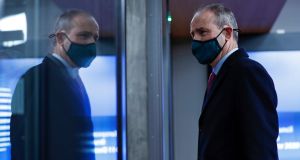 Taoiseach Micheál Martin: ‘Let us summon the courage and resilience of the past to meet the challenges of now, to build a better future for tomorrow.’ Photograph: Francisco Seco/Pool/EPA

Taoiseach Micheál Martin has urged Irish people to view the events of the past through “the measured eye of the discipline of history” as a means towards reconciliation.

Mr Martin was speaking as he participated in a commemoration on Friday night to mark the Burning of Cork by British forces 100 years ago.

The ceremony featured a light projection which recreated the razing of Cork City Hall on the night of December 11th, 1920.

He said it was important Irish people not only remember the momentous events that occurred in Cork during the struggle for freedom but that they also pay homage to the revolutionary generation who helped make Ireland’s one of the world’s oldest continuous democracies.

“There are certain events in a nation’s history that stand out in its struggle for independence. The burning of this city 100 years ago to this very evening is one such moment,” said Mr Martin at an event at Cork City Hall.

Something very special is beginning at City Hall as we mark the devastation that beset this city on this night 100 years ago #BurningofCork #Cork1920 pic.twitter.com/rVA8Zcl8tQ

“It is embedded into the memory and consciousness of all Corkonians, and stands there along with the murder of Tomás MacCurtain and the hunger strike, death and funeral of Terence MacSwiney, as elemental reminders of Cork’s contribution to Ireland’s struggle for Independence.”

Much of Cork city centre, including much of Patrick Street and adjoining streets down to Oliver Plunkett Street, was set ablaze, as was Cork City Hall across the south channel of the River Lee, when auxiliaries went on the rampage in the city, looting and burning buildings.

Auxiliaries equipped with cans of petrol set fires and shot dead Jeremiah Delany (20) and his brother Cornelius (25) in retaliation for an IRA ambush at Dillon’s Cross near Victoria Barracks which led to the death of cadet Spencer Chapman (28).

A former lord mayor of Cork, Mr Martin said great credit was due to the revolutionary generation of Irish men and women that, from the ashes of the city and all the broken dreams and painful legacies, they went on to build the dynamic independent country that Ireland is today.

“The burning of Cork was an iconic moment in a period of great tumult and sacrifice. As we look back on the past, we should do so not through rose-tinted glasses, but through the measured eye of the discipline of history,” said Mr Martin.

“We share an island where contested history, selective memory, and provocative assertions of identity can be barriers to mutual accommodation and the reconciliation necessary to our shared future,” he added, at a ceremony where numbers were limited due to Covid-19 guidelines.

“We stand on the shoulders of that revolutionary generation, they are our inspiration and we remember them this night. Let us summon the courage and resilience of the past to meet the challenges of now, to build a better future for tomorrow.”

Lord Mayor of Cork Cllr Joe Kavanagh noted that historians had identified Cork as “the cockpit of the Irish Revolution” and while the city and county accounted for just 9 per cent of the population of the island of Ireland in 1920, it accounted for 34 per cent of all active IRA volunteers in the fight for freedom.

Cork saw more IRA ambushes and raids than anywhere else on the island and by the end of 1920, the RIC had abandoned two-thirds of its barracks in Cork city and county because of the people’s resistance, he said.