Students could get Leaving Cert points for work experience 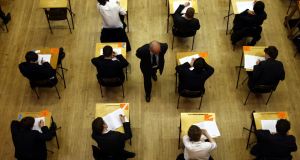 Students could get Leaving Cert points for completing accredited work experience or apprenticeships while still in school under draft plans being examined for reforming the senior cycle. Photograph: David Jones/PA Wire

Students could get Leaving Cert points for completing accredited work experience or apprenticeships while still in school under draft plans being examined for reforming the senior cycle.

An advisory report on proposals to reform the senior cycle is being finalised by the State advisory body on the curriculum and is due to be sent to the Minister for Education, Norma Foley, early next year.

Sources say the draft report acknowledges that the current Leaving Cert is widely seen as an entrance exam for third level, which neglects broader skills and limits students’ exposure to vocational options.

An option being considered is giving students the opportunity to complete foundation apprenticeships or modules of vocational courses in “off-site” settings such as local further education colleges.

These vocational pathways would have equal status with more traditional subjects and could be recognised for Leaving Cert points or entry into third level.

The idea is loosely modelled on a system in Scotland where senior cycle students have the option of completing courses part time in local further education colleges and accredited work experience.

The advisory report being produced by the National Council for Curriculum and Assessment is due to be finalised early next year and will be sent to Ms Foley for consideration.

The current Leaving Cert has been criticised in many quarters for not offering enough vocational pathways for students.

For example, a recent review by the Organisation for Economic Co-operation and Development found the Leaving Cert is “too narrow and rigid” and its main focus seemed to be acting as a filter for entry into higher education.

The review states that it is “not clear how senior cycle is at present preparing students for the future beyond sitting the Leaving Cert”.

School managers and employers have also said any reforms must emphasise the need for students to have “21st century” skills such as critical thinking, independent learning, communication/presentation and teamwork skills.

Solas, the umbrella body for the further education and training sector, said it would be keen to play a role in boosting students’ access to vocational options.

Andrew Brownlee, chief executive of Solas, said a key barrier for students at present is that many do not get any exposure to vocational learning in school.

“International approaches suggest a potential role for further education and training in offering modules and tasters of vocational courses to second-level students where existing teaching resources do not have the required technical experience available,” he said.

The reforms being floated, he said, offer an exciting change for students to complete modules as an integrated part of the senior cycle alongside other options and components.

However, some groups such as the Association of Secondary Teachers in Ireland have questioned the need for major reform and say they must be fully consulted before any changes are decided.

An interim report on reforming the senior cycle last year found an appetite for the structure of senior cycle to be made more flexible, with exams spaced out and a much broader array of assessment methods such as projects, teamwork and portfolios.

It also found a desire among groups who were consulted to introduce successful elements from transition year, such as work experience or life skills, into senior cycle.

The review so far has included consultations with 41 schools, about 2,500 students and hundreds of teachers and parents, as well as feedback with other stakeholders.