Killing of priest and civilian in Cork bankrupted Auxiliaries of credibility, says historian 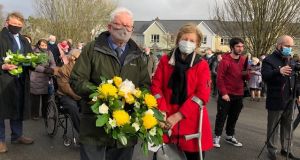 Helen O’Brien and her brother Joe Cronin of Cork city, grand nephew and grand niece of the late Rev Canon T.J. Magner with Crowley family in the background.

The murders of a Catholic priest and a young civilian by the Auxiliaries in west Cork just days after the burning of Cork city bankrupted the force of any remaining credibility, according to a leading historian at a ceremony to mark the 100th anniversary of the killings.

Dr Mervyn O’Driscoll of the School of History at University College Cork said the murders of Canon Thomas Magner (70) and Tadhg Crowley (22) at Ballyhalwick in Dunmanway on December 15th, 1920, by cadet sergeant Vernon Hart caused outrage in Britain and internationally as well as in Ireland.

Speaking at a ceremony at the graveside of Canon Magner in St Patrick’s Church in Dunmanway, Dr O’Driscoll recalled the events of 100 years ago which happened just a few days after K Company of the Auxiliaries were transferred to west Cork after going on the rampage and burning Cork city.

“Canon Magner was described as ‘genial’, ‘benevolent’ and ‘popular’ – an active parish priest with an ‘impressive and winning manner’, he reputedly favoured a constitutional and peaceful settlement for Ireland - reports described a pacifist and a ‘most inoffensive priest who took no part in politics’”.

Dr O’Driscoll recounted how Canon Magner was out for a walk on December 15th, 1920, when he encountered resident magistrate PS Brady, who was experiencing difficulties with his car en route from Bantry to Bandon so Canon Magner offered to give him a push to restart the car.

He hailed Tadhg Crowley who was cycling by and he stopped to assist just as two Crossley tenders carrying members of K Company of the Auxiliaries, recently deployed to the area and based at the Dunmanway Workhouse, arrived on the scene.

“The second tender under the command of Cadet Sergeant Vernon Hart stopped 150 yards past the car. Hart walked back, questioned Brady but feigned disbelief that he was a resident magistrate. He turned to Tadhg Crowley and requested a permit before hitting and shooting him dead.

“Next, he turned to Canon Magner whom he shot twice after forcing him to kneel and knocking off his hat. He ordered away two Auxiliaries, who attempted to intervene, with his revolver. Some propose that the Canon remonstrated with Hart on Tadhg Crowley’s behalf after he shot Crowley.”

Dr O’Driscoll recalled that Hart was later court-martialled by the British authorities and found guilty but insane while there were also suggestions, when the murders were raised in the House of Commons, that he had been drinking heavily.

He said the tragedy fitted into the deadly spiral of violence and reprisal of the times and the fates of Canon Magner and Tadhg Crowley were decided on December 11th when the IRA ambushed members of K Company of the Auxiliaries at Dillon’s Cross in Cork city, injuring 11 Auxiliaries.

One Auxiliary, cadet Spencer Chapman died of his injuries and Hart was at his deathbed before K Company was dispersed to west Cork to defuse tensions after members of the unit went on the rampage in Cork city on the night of December 11th, setting much of the city centre alight, he said.

“As the embers of Patrick Street in Cork city smouldered, Canon Magner and Tadhg Crowley met Vernon Hart who was either intent on revenge for his friend or ‘mad as a hatter’ or both,” said Dr O’Driscoll, who noted that Martial Law had been introduced in Cork after the Kilmichael Ambush.

“Despite tit-for-tat violence, Lloyd George’s government was ambivalent towards the pervasive reprisals of the Black and Tans and Auxiliaries – indiscipline reigned and reprisals were more akin to mob behaviour than organised police action and lawlessness ruled.”

The burning of Cork and the killings of Canon Magner and Tadhg Crowley led to former British Prime Minister, Herbert Asquith denouncing efforts to suppress Irish unrest with “a counter campaign” of murder and arson while the Labour movement in the UK was also highly critical of events in Ireland.

Meanwhile the Bishop of Cork, Dr Daniel Coholan, who was a critic of both British excesses and IRA violence, arguing that “murder is murder, arson is arson,” irrespective of who was involved, rejected a call by the inspector general of the RIC to convey his sympathies to Canon Magner’s relatives.

“We feel that the entire community of Dunmanway has suffered an irreparable loss in the death of one who, by the influence of his upright character and wise counsel, had ever promoted peace and harmony among all classes and creeds - we all mourn his loss for we all revered and loved him.”

Dr O’Driscoll said that despite the local Christian communities being in firm agreement in their efforts to quell the cult of violence, the spiral of violence was unstoppable and continued into 1921 and beyond but important lessons can be learned from the killings.

“The murders (of Canon Magner and Tadhg Crowley) are a warning from history to seek reconciliation and understanding. Conflict leaves deadly scars and poisonous grievances that require generations of healing and mutual tolerance and even then, that is often insufficient.”

However in a hopeful post-script, Dr O’Driscoll recalled how Canon Magner’s rosary beads were taken at the scene by an Auxiliary Officer, Major JR Black who later emigrated to Australia but his descendants visited Ireland in 1995 and repatriated the rosary beads.

“It is fitting that those rosary beads have been brought here today – it will be the first time in a century that they will be united with Canon Magner ... let the moral of the story be one of reconciliation, acceptance and closure.”