Chicago joins Mayo faithful in the hope of All-Ireland victory 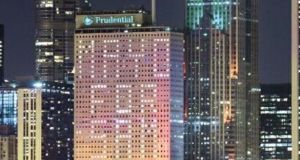 The Prudential Building in Chicago lit up with the slogan Mayo For Sam ahead of Saturday’s All-Ireland Senior Football final between Mayo and Dublin. Photograph: Bob Reiter via twitter

The Mayo All-Ireland football team will walk on to the Croke Park pitch this Saturday with, it is probably fair to say, the support of 31 counties, hoping that the extraordinary dominance by Dublin can be stopped, for one year at least.

When fortune favours, the county’s football fans travel, and do so in numbers, often including many who have made the journey from the four corners of the Earth to get to Croke Park in the hope of seeing, finally, a triumph.

This year, however, they do so with a new well of support in their hunt for an end to a 69-year drought – the official backing of Chicago’s trades unions, who have lit up one of the Windy City’s main buildings to declare “Mayo for Sam”.

“In honour of the fine gentlemen from Co Mayo playing in the All-Ireland game this weekend, we offer this token of appreciation from Chicago’s unions and the Windy City, ” says Bob Reiter, president of the Chicago Federation of Labor as he tweets a striking image of the Prudential Building.

In years past, more than a few Mayo-born Chicago emigrants would have travelled home for the All-Ireland, bar the existence of Covid-19 restrictions that mean the stadium will again be devoid of spectators.

In honor of the fine gentlemen from the County Mayo playing in the All Ireland Game this weekend, we offer this token of appreciation from Chicago’s Unions and the Windy City. #MayoForSam @MayoGAA pic.twitter.com/w33ROZehBe

Mayo supporter John Gunnigan, who runs the popular Mayo GAA blog, lives within a mile of Croke Park but says he may as well be on the far side of the moon this weekend given the curbs.

Even if he got a late ticket, he would not go, he says. “From what I hear, the matches are just ghostly silent. This championship is really one to be seen on the sofa; that is where the atmosphere is now.”

Oddly, perhaps, Covid-19 could a plus, since Gunnigan wonders if the supporters’ unbridled enthusiasm could be holding players back. Watching them compete in empty stadiums, he has observed a more “carefree” approach.

“It is an awful thing to say but I do think they may be better without us there. Sometimes I wonder when the crowd is really roaring does it affect them negatively, or fire them up? Do we love them a bit too much?” he asks.

John Regan, a part-time hairdresser and full-time Mayo superfan, has never watched a Mayo final from his home county, having followed the team to all of their big matches.

The 74-year-old Kiltimagh resident said he “would be in tears” watching supporters make their way into the stadium before a game. Following the footballers to games is “like a second religion”in Co Mayo, he says.

Regan, who will watch the match from his home, one already painted white, red and green, is disappointed to be missing out on “the day” – the bus trip, overnights in the Belvedere Hotel and the pre-match atmosphere. I was thinking that they might just bend the rules to allow a few supporters go, but it is probably best that we aren’t. It is better to be safe . . . I know it is not the same watching it on the TV, but at least we have sport to watch.”

For Gunnigan, the atmosphere around Croke Park will be especially poignant. “It will be weird to be that close and not hear it . . . you may as well be in America this year . . . or on the moon.”

From Chicago, the Prudential Building and city’s unions declare their support. “Maybe some love from the Chicago skyline will help,” notes the Chicago Sun-Times.