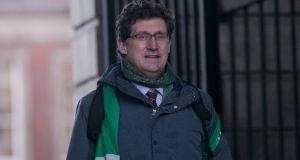 Leader of the Green Party Eamon Ryan, deputy leader Catherine Martin, and Ministers Roderic O’Gorman and Pippa Hackett all set out reasons why they supported the Government decision to bring a motion before the Dáil to ratify the final elements of the trade deal with Canada. Photograph: Gareth Chaney/Collins.

The four senior Green ministers have presented a united front in backing the trade deal between the European Union and Canada.

In a long letter to Green Party members on Wednesday, party leader Eamon Ryan, deputy leader Catherine Martin, and Ministers Roderic O’Gorman and Pippa Hackett all set out reasons why they supported the Government decision to bring a motion before the Dáil to ratify the final elements of the trade deal with Canada.

The letter means that the leadership of the party has come out jointly in favour of endorsing the treaty, which two TDs, Neasa Hourigan and Patrick Costello, have already said they will vote against. This is the first time the four senior ministers have made a joint statement and the show of unity is likely to draw a line under the issue and reduce the prospects of a difficult split over the issue.

Most of the CETA treaty - which removes tariffs and barriers in trade between the EU and Canada - is already in operation since 2017.

However, a controversial mechanism to resolve disputes has yet to be ratified. Environmental groups and public health campaigners have campaigned against this mechanism, known as the Investor Court System (ICS), because they argue it can supersede domestic law and allow companies sue countries in relation to environmental and public health laws on the grounds it has a negative impact on profits.

In the letter the four ministers acknowledge it is “a sensitive issue for the Green Party because in the past we have campaigned against CETA, and in particular against the investment dispute mechanism.”

The letter argues that the nature of the agreement has changed in a way that allays most of those concerns. The letter cites four grounds for those changes. It says the ICS has been improved and a decision by the European Court of Justice found it was compatible with EU law.

“Contrary to certain claims, Canadian companies will not be able sue the Irish government simply for making new laws around environmental protection. This is made explicit in the text of the trade deal.”

The letter also states the Government has been reassured about the climate impact, and both parties to CETA agreed to implement the 2015 Paris Agreement on climate change.

The four Ministers also argue that the Programme for Government has endorsed CETA, even though it is not specifically mentioned. This assertion has been challenged by those in the party who oppose it, saying it was left out because no agreement could be reached on CETA.

The fourth argument put forward is that ratification is politically important for Ireland, showing the EU can work with other countries especially at a time of Brexit and when international cooperation is under threat.

“We believe that it would not have been possible to reopen the CETA agreement, but we will continue to fight for ongoing improvements in other trade agreements.None of this takes away from the fact that this is a difficult issue,” it states.

The letter says the issue was raised three times at the parliamentary party over the past six weeks and that the party has now committed to defer the vote until January to allow more time for debate.

The internal debate over CETA in the party has reopened some of the internal divisions that emerged while the party was involved in negotiations on government-formation.