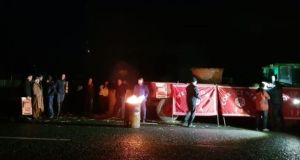 The Tesco central distribution centre in Dublin is being blockaded by farmers as part of an ongoing protest about beef prices.

Members of the IFA began the protest at the Tesco centre in Donabate at 7am and say they will continue the protest for 12 hours.

IFA president Joe Healy said a Tesco half-price beef sale was an “insult to farmers and the work they do”.

He also criticised Larry Goodman’s ABP group which he accused of a lack of transparency over prices.

Last week the country’s biggest beef processor announced it will increase prices it pays farmers for their cattle, but included no figures.

“From talking to farmers, it would seem that generally the price rises appear to be 5c/kg for heifers and 10c/kg for steers,” he said.

“This still leaves the Irish price well short of the Bord Bia EU benchmark and it remains over 50c off the UK price as their market continues to strengthen. The UK price increased again last week and sterling improved to 84p/€1 last Friday,” he said.

He accused ABP of acting in bad faith as they could have increased cattle prices some weeks ago, he claimed, “but they did not. Instead, they pocketed the increases for themselves and refused to pass it back to farmers”.

Mr Healy warned that farmers will continue their actions until they have a substantial price increase.

He added: “ We don’t have to wait until ‘price setting Friday’, as ABP insisted in their press statement. This can happen any day. This sort of controlling practice only serves to fuel the belief amongst farmers that ABP are abusing their dominant position in the market.

“I would call on the other meat processors to break from this practice and announce a further price increase immediately, in line with increases in the market.”