The former miner community of Bolsover is an unlikely target for the Conservatives in the UK general election but years of austerity cuts have fractured the vote and split old loyalties. Video: Enda O'Dowd 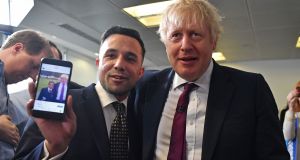 Boris Johnson will aggressively target Labour voters who backed Brexit in the final days of Britain’s general election campaign, telling them that Jeremy Corbyn has betrayed the 2016 referendum. With three days to go to polling day, the prime minister will campaign on Monday in four Labour-held constituencies in the north of England which voted Leave.

Mr Corbyn spent the weekend campaigning in Labour-held marginals in England and Wales, as polls continue to point to a Conservative majority. An average of polls gives the Conservatives a 10-point lead over Labour, although some new polls at the weekend showed the contest tightening.

Among the constituencies Mr Johnson will visit today is Sunderland, where the size of the Brexit vote offered the first sign on the night of the 2016 referendum that Leave was on course for victory.

“It’s now been 1,264 days since Sunderland’s roar was heard on the night of 23 June 2016, 1,264 days in which parliament should have delivered what you voted for, taken us out of the EU, and addressed all the reasons you voted so decisively for change,” he is expected to say.

He will accuse parliament of bending every rule and breaking every convention to “delay, dilute and deny” Brexit.

“The Labour party has let you down most of all. Under Jeremy Corbyn, they promised to honour the result of the referendum – before voting against Brexit every chance they had. They won their seats on a false prospectus and then stuck two fingers up to the public. Now they are proposing another referendum – this time rigging the result by extending the franchise to two million EU citizens. It’s been the Great Betrayal, orchestrated from Islington by politicians who sneer at your values and ignore your votes,” he is expected to say.

Shadow chancellor John McDonnell will lay out details of Labour’s first budget if it wins power, promising that his first priority will be to end spending cuts to social security and public services. He will pledge to “get money moving out of Whitehall and the City” and into parts of Britain that have been neglected.

“In too many parts of the country, we have been wasting people’s potential. That’s down to successive governments sitting back and leaving the fate of whole communities at the mercy of market forces,” he will say.

“Good jobs and whole industries that were once the pride of our country have been lost and replaced with dreary, exploitative, insecure and low-paid jobs. Or in some cases no jobs at all. No wonder people feel disillusioned in politicians.”

Since the beginning of the campaign, most Leave voters appear to have moved behind the Conservatives, as support for Nigel Farage’s Brexit Party has evaporated. Polls suggest that the Remain vote is still divided between Labour and the Liberal Democrats, although Labour has gained ground at the smaller party’s expense.

Liberal Democrat leader Jo Swinson will today promise that, as soon as MPs return to Westminster after the election, her party will table a Bill for a second Brexit referendum. Ms Swinson is committed to cancelling Brexit by revoking article 50 if the Liberal Democrats win a majority but polls suggest they will return with fewer MPs than before the election.

“The more Liberal Democrat MPs we have in parliament the stronger our hand will be in stopping Boris Johnson and his catastrophic Brexit plans. We have legislation ready to go to secure a People’s Vote with the option to stay in the EU. Liberal Democrats are standing up for Remainers everywhere. We have been leading the fight to stop Brexit for over three years and will continue to fight tooth and nail to keep the UK in the EU,” she said.