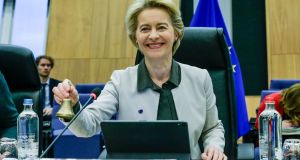 A legally binding commitment by the EU to work towards carbon-neutrality by 2050 lies at the heart of the European Commission’s Green New Deal launched Wednesday morning. The deal includes a 50-55 per cent emissions reduction target for 2030, a very demanding target for Ireland.

It is expected that EU leaders at Thursday’s summit will endorse the 2050 target and agree to establish a Just Transition Mechanism of the order of €100 billion of public and private money to help the transition of economies like Poland which are most heavily dependent on carbon.

The deal was unveiled by EU Commission president Ursula Van der Leyen who spoke to the press of it as hugely “ambitious” and a “European man on the moon moment”.

“The goal is to reconcile our economy with our planet . . . to make it work for all our people,” she said. The old growth model based on fossil fuels and pollution is out of date, she said, insisting that Europe could be the frontrunner of change.

The challenge, the commission said, was the need to find €260 billion in additional annual investment from the state and private sectors, the equivalent of 1.2 per cent of EU GDP in 2018.

Ms Van der Leyen presented the package to MEPs following its approval by the commission. On Friday she will outline it to EU leaders at their summit while vice-president Frans Timmermans will do likewise at the COP25 summit in Madrid.

Among the measures proposed are a climate law committing the union to achieving net-zero emissions by 2050 and to boost the bloc’s 2030 climate targets; a carbon border tax; up to €100 billion to finance the transition; as well as sectoral initiatives involving legislative measures and action plans spanning agriculture, transport, energy, chemicals, construction and more. The commission’s investment and research funding will be heavily focussed on climate-related challenges.

The EU’s own annual climate action progress report warns, however, that reductions in emissions will have to speed up significantly for the EU to become carbon-neutral by 2050.

The commission’s flagship policy, which it sees as defining its and the union’s strategic direction for the next seven years, mainstreams climate issues throughout its operations and programmes. In trade, for example, it will require new international agreements to be conditional on observance of the Paris climate emission commitments of partners. And it will propose a carbon border tax, an import tariff charged onto the difference between the EU carbon price and that in the exporting country.

Commitments to massively increase investment in the green economy will depend crucially, however, on the currently stalled EU budget (Multiannual financial framework) talks which the leaders will also address on Thursday.

“I want us to agree on the commitment for the EU to become climate-neutral by 2050,” European Council president Charles Michel told leaders in his invitation letter, released Tuesday evening. “It will require efforts from all member states. We will put in place a framework and the necessary resources to chart a fair and balanced path towards our objective.

“This means taking into account the different national realities and starting points,” he writes, an allusion to the opposition to the 2050 target from Poland Hungary and the Czech Republic unless the Just Transition Mechanism is sufficiently substantial and represents ‘new’ cash.

The commission and then leaders will also be asked to examine whether the spending commitments on investment and research proposed conform with both EU state aid rules and the strict spending disciplines of the Growth and Stability Pact. If not, whether these could be amended specifically to allow climate measures, is a prospect that fills the EU more fiscally conservative states with horror.

The Green Deal sets out an ambitious programme of measures sector by sector.

In the energy field it proposes to study national energy plans for their compatibility with targets , to encourage massive investment in home renovation, and in offshore sourcing. The commission is proposing an action plan on the circular economy to encourage sustainable products like recyclable batteries and new waste policies.

It will set a zero pollution target to attack industrial pollution and reform the EU’s chemicals legislation.

Preserving biodiversity is a particular priority with the EU hoping to take the lead at the China biodiversity summit this summer. The paper urges a new forest strategy with substantial increases in tree planting, particularly in cities.

Its “farm to fork” strategy is based on reforms already under discussion of Common Agriculture Policy where up to 40 per cent of farm spending will be tied to environmental objectives.

In transport, the deal proposes to continue to see reduction in car, plane and ship emissions and the encouragement of sustainable fuels, and wants to see up to one million charging points for electric cars installed in Europe by 2025. Improving train infrastructure is seen as a priority.

Infant hurt after scrambler crashes into stationary quad in Dublin 09:40
Coronavirus: Dublin hospitals under ‘significant pressure’ as county set for Level 3 09:04
Trump envoy to Northern Ireland warns against hard border 08:48
Man due in court over robbery of wheelchair user in Cork 08:06
Number of H1 grades would have been ‘untenable’ without standardisation - Foley 06:27