Taoiseach Micheál Martin has described the rising number of Covid-19 cases in Northern Ireland as "very worrying", saying that he had spoken with British prime minister Boris Johnson about the issue. Video: EU Council 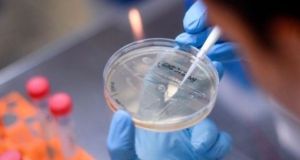 In Belfast 1,171 people were confirmed positive for the virus in the last seven days. File photograph: Douglas Magno/ AFP

The North’s first and deputy first ministers warned on Thursday of tough and significant decisions ahead as the number of coronavirus cases and hospitalisations continue to rise.

The first minister, Arlene Foster, said Northern Ireland was in a “grave and serious situation” and predicted that unless action was taken, the numbers being treated in hospital would exceed those seen in the first wave of the virus by the end of the month.

“That will be hundreds of people requiring hospital within the next two or three weeks,” she said.

The Executive, Ms Foster said, would take a “significant strategic stocktake of the situation” in the days ahead, but ministers were facing “some of the toughest decisions we will ever have to.”

Ms Foster and the deputy first minister, Michelle O’Neill, have requested a call with the British prime minister, Boris Johnston, to ask for the financial backing for any further measures to tackle the pandemic.

The North’s Executive has limited financial powers, and Ms Foster said on Thursday if the North was to “move to more restrictive measures in terms of the economy ... we would need the support of the Prime Minister and of Westminster.”

Ms O’Neill said she welcomed the intervention on this by the Taoiseach, saying that while everyone in Ireland was facing a “very difficult situation ... no doubt we here in the North seem to be in a worse situation right now.

“We’re looking towards the British government for financial support to help us deal with that situation that we’re facing right now,” she said.

The latest figures released by the North’s Department of Health (DoH) on Thursday afternoon showed 923 people had tested positive for Covid-19 in the last 24 hours, the second highest total on record.

One more coronavirus-related death was reported, bringing the total recorded by the Department to 587.

Ministers on Thursday approved an extension to the number of settings where a face covering is mandatory, as well as increased fines for breaches of the regulations.

The fixed penalty notice which previously started at £60 has been replaced by a fine of £200, while the tariff for a number of offences including breaching early closing requirements in the hospitality industry and not implementing social distancing measures is now a maximum of £10,000.

So far the police have issued 1,156 of the £60 fines for breaching public health regulations, 203 prohibition notices to licensed premises or private dwellings, and 27 of the £1,000 fines to people who failed to self-isolate following international travel, the first minister, Arlene Foster, said.

However they stopped short of extending the more stringent restrictions, currently in place in Derry City and Strabane District Council, to other parts of the North.

Questioned over the decision at a press conference following the Executive’s meeting, Ms Foster said this was because “unlike in the north west, the rate of infection is not running as hard and as fast as it was in that area.”

While the figures in Derry and Strabane continue to grow “exponentially”, Ms Foster said, the growth in Belfast and in Newry, Mourne and Down had been “blunted”, with the deputy first minister, Michelle O’Neill, adding that this was due to “the actions of people over the course of the last number of weeks.”

“We can start to see that situation stabilised, so that’s what demonstrates to people that the power is within our hands to be able to stop the spread,” she said.

New restrictions aimed at limiting the spread of the virus came into effect in the Derry City and Strabane District Council area on Monday.

Hospitality venues are closed to all but takeaway and delivery services and outdoor service, and people have been advised to avoid travelling into and out of the area.

Ms O’Neill said the prevalence of the virus in Border areas demonstrated that “strong all-island co-ordination” and east-west co-operation was necessary.

The North’s chief scientific adviser, Professor Ian Young, told the Assembly’s health committee on Thursday that more than half of the cases in identifiable clusters in Derry and Strabane were associated with the hospitality sector.

In Belfast 1,171 people were confirmed to have the virus in the last seven days, but with a greater population than Derry and Strabane the rate per 100,000 remains lower, at 343. Rates are also high in Newry, Mourne and Down and Mid Ulster.

A total of 120 patients with coronavirus are now being treated in the North’s hospitals, with 15 people in intensive care.

Questioned by the Alliance MLA, Paula Bradshaw, about how and where the virus was spreading, Prof Young said that initially the evidence suggested that the majority of cases were as consequence of household transmission, and so restrictions focused on household mixing.

“At present, the largest group of cases that are being identified are described as community transmission,” he said.

“Community transmission is a fairly broad basket which includes a wide range of settings . . . that will include the hospitality sector and sports venues.

“Often what the contact tracing service find is that when there’s a cluster, that individuals have been mixing not just in an individual setting but in multiple settings, for example a cluster associated with a sporting club, on investigation it may turn out that individuals have mixed in the sporting context but subsequently also in a social context, either in the hospitality sector or in a household setting.

Meanwhile, the North’s economy minister, Diane Dodds, warned that an earlier prediction that the number of people unemployed in Northern Ireland could rise to 100,000 by the end of 2020 now looked “optimistic” as it had been based on no additional tightening of the coronavirus regulations.

“The consequences of further restrictions will be job losses and a spike in unemployment,” she said.

Ms Dodds reiterated the call by ministers for support from the UK Treasury if there is to be another lockdown, saying that Northern Ireland could not absorb the financial impact.

“We simply as an Executive do not have the financial firepower to support businesses in Northern Ireland in the way that we would have done through schemes that were introduced at a national level earlier in the year,” she said. Additional reporting - PA

1 Restaurants and gastropubs to reopen in December under Government plan
2 Helen McEntee holds up well for someone with barely a leg to stand on
3 In Brexit end game, Johnson scours menu of unpalatable choices
4 Coronavirus: 335 new cases and three further deaths
5 Q&A: What restrictions are going to be lifted next week?
Real news has value SUBSCRIBE