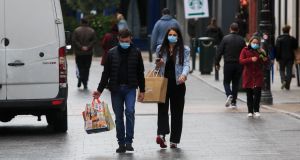 The 395 clusters of the disease reported in private homes involved 3,199 cases, the HPSC said.

There were 17 outbreaks in workplaces, involving 157 cases.

The number of outbreaks linked to schools was 12, down from 13 the previous week, while another two clusters reported last week were linked to third level colleges.

Of the 48 outbreaks in schools since they reopened, 47 are still active, with one investigation recorded as closed.

During September, 183 schools were the subject of mass testing, and 18 schools and childcare facilities reported more than one case, according to deputy chief medical officer Dr Ronan Glynn on Wednesday.

He pointed out that in many instances school cases would have arisen from activity in another area of society.

The overall proportion of cases in children aged up to 14 has not changed since schools re-opened, he said, while the overall number of cases has increased in line with generally rising figures.