No remdesivir shortage in Ireland, HSE says as concern grows for Europe’s supply 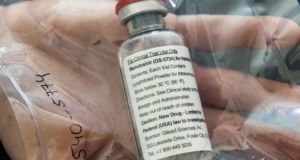 Remdesivir has been shown to be effective on patients who require supplementary oxygen and is the only Covid-19 pharmacological treatment option licensed for use in Ireland. Photograph: Ulrich Perrey/Pool/AFP via Getty Images

Unlike an increasing number of European countries, Ireland is not experiencing shortages of the drug remdesivir, which is used to treat Covid-19 and reduces recovery time in moderately-ill patients with breathing difficulties in hospital settings, the HSE has confirmed.

Acute shortages are being reported in a number of countries because of difficulties with supplies from the US, the main manufacturing base for the drug.

Remdesivir has been shown to be effective on patients who require supplementary oxygen and is the only Covid-19 pharmacological treatment option licensed for use in Ireland, a HSE spokeswoman confirmed.

With most countries experiencing a sustained resurgence in coronavirus cases, lack of availability of remdesivir is a growing concern.

Over the past week, US president Donald Trump was given a five-day dose of the drug, though he was at an early stage of the disease and this was not the usual circumstances in which it is administered.

The US in June bought up virtually all stocks for a three-month period (more than 500,000 doses), but even US hospitals have indicated recently they cannot get enough to treat their patients. In Europe, where the European Commission buys on behalf of member states, the Czech Republic and the Netherlands, as well as the UK, are short of supplies.

Remdesivir was originally developed by the American pharmaceutical company Gilead Sciences to treat Ebola. It was approved for emergency use in treating Covid-19 in May in the US and in Europe the following month.

Ireland is a participant in the European Commission Joint Procurement Exercise Framework Contract for remdesivir, the HSE confirmed. “Stock of remdesivir is available at Irish wholesaler level for hospitals to order. The stock available in the wholesaler is meeting the current demand from hospitals. Individual hospitals order to supply the patients requiring treatment,” a spokeswoman added.

Ireland is also benefiting from a Department of Health initiative with expert input from the Clinical Research Facility in UCC and the Health Research Board to open the World Health Organisation Solidarity trial in a number of Irish teaching hospitals, “supporting Irish patient access to an international collaborative research study on Covid-19” – including assessing remdesivir.

A clinical trial showed patients with moderate Covid-19 infections who received a five-day course were more likely to get better after 11 days than those receiving standard treatment. The trial showed it also helps patients with pneumonia.

It is one of only two drugs proven to work against Covid-19. While it has been shown to help patients recover faster and shorten the length of hospital treatment, it is not a cure. This is unlike the steroid dexamethasone, which saves lives and is widely available and cheap because it is an old drug. Remdesivir is under patent, so no other company can make it without Gilead’s permission.

Doctors in the UK have been instructed to treat only those patients who can most benefit from the drug to conserve its limited stocks.

A “supply disruption note” issued to all doctors on September 29th asked them to do a stock-take in their hospitals to ensure they knew how much of the drug they had left. Some stocks would be held centrally, the UK department of health and social care said, for allocation “to areas of greatest need”.

Doctors were told they should prescribe remdesivir only to patients with Covid-related pneumonia who are in need of oxygen to breathe and should limit any course of treatment to five days.

Some UK hospitals were reported to be down to their last few doses of the drug. Others were figuring out how to ration it, for instance by giving fewer than five doses if a patient seemed to be doing well.

The criteria for using remdesivir given in the supply disruption note meant it could not be used in the National Health Service before people had developed pneumonia, in spite of evidence that giving the antiviral as soon as possible is better.

In the US, the Food and Drug Administration had written to Gilead seeking to broaden the criteria for use, so that people can be given it whether they are on oxygen or not, which will also increase demand. –Additional reporting Guardian