And then there were none: Travel green list down to zero 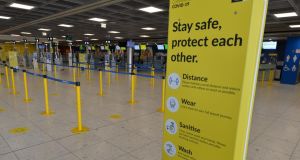 There are now no European countries which qualify to be on the so-called green list of places where Irish people can travel without any restrictions imposed upon their return home.

With the rate of Covid-19 rising in most countries across Europe there are now none where the incidence of Covid-19 is below the threshold of 25 cases per 100,000 of population applied by the Irish authorities when deciding which countries are on the list.

When the first green list was published at the end of July the countries which were deemed safe for travel with “normal precautions” were Malta, Finland, Norway, Italy, Hungary, Estonia, Latvia, Lithuania, Cyprus, Slovakia, Greece, Greenland, Gibraltar, Monaco and San Marino.

At that point, the Government committed to updating its list every two weeks with the hope that the list would grow in time.

However, it failed to make any significant changes to the list until September when it said it would be updating the list weekly based on figures from the European Centre for Disease Prevention and Control. (ECDPC).

Under the new rules, the Department of Foreign Affairs (DFA) uses the figures the ECDPC publish on a Thursday morning to announce the updates which come into affect on the following Monday.

Last Monday there were only four countries left on the list Cyprus, Finland, Latvia and Lichtenstein. Next Monday they will all be gone.

The list may be irrelevant as soon as next week if the Government adopts EU-wide rules under which a new traffic light system will operate. That could see Irish people able to travel more widely, as long as the rate of infection here can be brought under control

Under the new system, there would be a colour-coded system implemented, based on data provided by the ECDPC. Under the new rules, green-coloured countries will cover territories where the number of cases is low (less than 25 per 100,000 people in a 14-day period) and the percentage of positive tests is less than 3 per cent.

People travelling from countries designated as red will continue to have to quarantine for 14 days or will have to have a Covid-19 test to show they are negative.

According to the official figures, the incidence rate in Ireland is currently 112 which places the country firmly in the red zone.

Speaking at the Oireachtas Transport and Communications Networks Committee on Wednesday, the Ryanair chief executive Eddie Wilson warned that when the list is updated Ireland will “be saying we’re closed to every country in Europe”.

The Minister for Transport Eamon Ryan told the same hearing that EU foreign ministers will decide on adopting the system at a meeting next Tuesday, October 13th. However, he warned that public health remained the responsibility of member states, indicating that adoption of the traffic light system might not be as complete as the travel sector hopes.