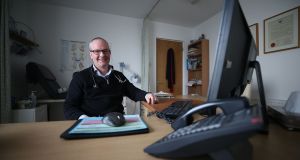 A Dublin GP says he has decided to close his practice after being threatened with suspension by the Medical Council over his anti-lockdown and anti-mask views on Covid-19.

Dr Marcus de Brun said he decided to end his HSE contract and to step back from public speaking “under duress”, in order to avoid being struck off.

Dr de Brun was a member of the Medical Council until last April, when he resigned over what he felt were failures to protect nursing home residents earlier in the pandemic.

He is the third doctor to come under pressure after expressing anti-lockdown views. Dr Martin Feeley resigned as clinical director of Dublin Midlands Hospital Group last month after advocating the shielding of vulnerable groups and the lifting of general restrictions. Limerick GP Pat Morrissey was this week removed as chairman of ShannonDoc after criticising the National Public Health Emergency Team (Nphet) and saying he treats patients with hydroxychloroquine against official guidelines.

Last week, Medical Council president Dr Rita Doyle wrote to Dr de Brun on foot of complaints received from other doctors after he spoke at an anti-mask rally in August.

Dr Doyle said the council was “concerned about your attendance at public events where social distancing is not observed and your public statements, whether via social media or otherwise, which would tend to undermine the regulations and guidelines published by the State in respect of the wearing of face coverings”.

She stressed that “doctors must continue to advocate for their patients by actively promoting the public health guidance, especially the three core actions of hand washing, social distancing and the wearing of face coverings”.

They have “a duty to ensure compliance with all laws and regulations relating to their practice”, she added.

She also took issue with guidance on Dr de Brun’s website advising vulnerable patients and those over 65 to wear masks. All patients are required to wear masks, according to HSE guidelines, she pointed out.

She said the council was “very concerned that you might continue to engage in events and public statements” which would undermine the State’s public health guidelines and was considering what further steps it may take, “to include considering its powers under Section 60 Medical Practitioners Act 2007”.

Section 60 provides for the suspension of a doctor “to protect the public” by way of an application to the High Court.

Dr de Brun said he was “shocked” and “amazed” to learn that the council considered him a danger to public health, but felt forced to take remedial action. “If I’m struck off, I won’t be able to practise – period.”

He said it seemed to be “okay” for the Government or Tánaiste Leo Varadkar not to follow the advice of the Nphet but this was not the case for doctors. “I’ve a family, I believe Covid-19 is real and I’ve worked in nursing homes and seen my patients die, but I don’t think they’re going about it in the right way,” said Dr de Brun, adding that he believed the Swedish approach (of lighter touch regulation combined with allowing immunity build in the population) “has some merit”.

He said he planned to continue working in out-of-hours and locum positions but his income would suffer a “serious blow”.