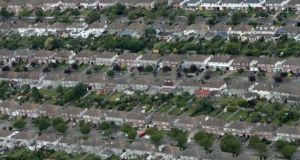 The national average re-letting time has dropped significantly since 2016, down to 28.9 weeks. File photograph: Frank Miller

More than 3,600 local authority homes lay vacant at the end of last year, with councils taking on average 28.9 weeks to re-let houses after they become vacant.

A report measuring the performance of the State’s 31 local authorities found there had been a “welcome reduction” in the level of vacant housing stock within local authorities – a trend that had continued since 2016.

The National Oversight and Audit Commission (NOAC) said coupled with that, the national average re-letting time had dropped significantly since 2016, down to 28.9 weeks.

“There are still authorities that need to improve average times but the current trend is very welcome.”

The proportion of the housing stock vacant at the end of 2017 was less than the national average in the case of 17 local authorities, including in Limerick, Waterford, south Dublin, Cork, Kildare, Kilkenny and Westmeath county councils.

The NOAC said it had previously noted that a key action in the Government’s Rebuilding Ireland - Action Plan for Housing and Homelessness was to achieve the refurbishment and re-letting of vacant social housing units with minimal delay in line with best asset management practices.

It said that with increasing demand for social housing support nationwide, it was more and more important that local authorities put in place good stock management and maintenance practices.

“Underpinning that should be an emphasis on achieving good value for money in respect of expenditure on stock maintenance.”

The audit commission said there were areas of performance within local authorities that were “generally below par nationally”.

It said that while the number of planning applications received was up across the State, inspections were “unacceptably low” for some authorities, with Longford and Louth inspecting just 2.13 per cent and 10.64 per cent respectively of new buildings.

Coronavirus virtual funerals: 'It’s not the same... very difficult to process' 02:05
Beyond the call of duty: Community gardaí help woman move her mother to safety 02:03
A doctor writes: Where are all the non-Covid-19 patients? 02:02
‘No point’ in coalition with FG-FF without two smaller groupings 02:00
Gardaí expected to upgrade investigation into man’s death to murder inquiry 01:45