Bacteria in mouth could help to detect colorectal cancer

Ailment still a significant killer despite advances in screening and treatment 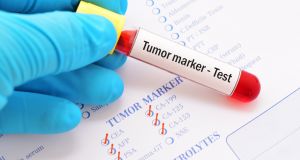 Recent papers by a team at at APC Microbiome Ireland research facility provide insight into the link between communities of bacteria and, critically, potential of a non-invasive test. File photograph: Getty Images

Bacteria found in the mouth and faeces could be used to predict and detect colorectal cancer in a more effective and cheaper way than using tests, according to Irish researchers.

Colorectal cancer is a significant killer in men and women despite advances in screening and treatment. in Ireland there are some 2,775 cases per annum, though early detection improves survival chances. It accounts for one-in-six cancers.

Recent papers by a team at at APC Microbiome Ireland research facility in Cork – published in the journal Gut and the British Medical Journal – have provided insight into the link between these communities of bacteria and, critically, potential of a non-invasive test they have developed. A high number of citations for the articles is telling indication of their significance.

The microbiota (communities of bacteria) living in the gastrointestinal tract in healthy people and patients with colorectal cancer differ, and this was reflected in diet, said lead researcher Prof Paul O’Toole. It also offers an indication into how microbiota could be modified by diet to protect against, or prevent, development of colorectal cancer, he added.

The microbiota differs in patients depending on where the tumours are located, with the altered bacteria found not only found in the cancerous tissue but throughout the colon.

The first abnormality in the colon is a growth or polyp, which, if undetected, can become a tumour. “For polyps in particular, the discriminatory power of the new test using combined oral and faecal samples was higher than for currently-used tests. Profiling the oral microbiome could significantly improve current screening programmes for the cancer if these findings are verified in larger study groups,” said Prof O’Toole.

The research allows separation of people with the cancer into four different groups based on their bacterial communities. And these correlate with tumour site and tumour properties, so these microbiota patterns might be involved in how the disease progresses, he said.

The distinct bacteria profiles found in patients with cancer can also be detected in people with polyps. This indicates that the differing bacterial communities are present before cancer develops, thus early testing could lead to earlier detection and intervention – a key aspect of beating cancer, explained Prof O’Toole.

Combined testing of the oral and faecal bacteria “has a better discriminatory power, particularly for polyps, compared to currently used diagnostic tests for cancer which reliably test advanced tumours but are less sensitive for early lesions”.

The APC Microbiome team has a patent application pending for the test with a view to clinical evaluation with a much larger number of people.

“If it works in a very large population, we will have a test that is non invasive and cheap. It will be a game-changer,” he said.

The researchers found similar communities of oral bacteria on the surfaces of the mouth and on the tumour biopsy in patients with colorectal cancer. Abundance of one particular family of bacteria, known as Lachnospiracea, which are supported by a healthy and diverse diet, appeared to protect against colonisation of the colon by oral microbes associated with the cancer, since these bacteria were abundant in healthy people but present in much lower levels in patients with colon cancer.

This resonates with previous research which has shown that a “western” diet – which is prevalent in Ireland. This is characterised by high intakes of processed and high-fat, high-sugar foods, which contributes to development of colon cancer.

The association between bacteria and colon cancer was known for some years, though it’s still unknown if the bacteria cause the cancer, he said. But the research is indicating “outcome could depend on the bugs on the tumour”.