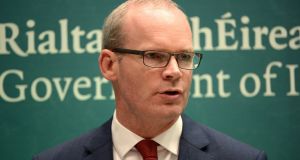 Simon Coveney: “There will be no withdrawal agreement without the backstop, end of story.” Photograph: Dara Mac Dónaill/The Irish Times

Reneging on the “backstop” by the United Kingdom to avoid a hard border after Brexit could open parts of the withdrawal treaty already agreed to renegotiation, a Government Minister has warned.

The Government last night rejected a suggestion by UK Brexit secretary Dominic Raab in a newspaper that an extension to Britain’s exit from the European Union after a transition period would be “an alternative” to the backstop guaranteeing no return to Border checks in Northern Ireland.

Tánaiste and Minister for Foreign Affairs Simon Coveney raised the prospect of a no-deal Brexit should the UK fail to honour its backstop commitment within the deal with the EU. “There will be no withdrawal agreement without the backstop, end of story,” he said.

The British government had already agreed to “a legally operable backstop” within the accord. “To suggest moving away from that now is not going to fly with Ireland or the EU as a whole,” he said.

“What we need now is for the negotiators to get back to work in Brussels and finish the final 10 per cent of the withdrawal agreement. This will not be achieved in newspapers or over the airwaves,” said Mr Coveney. “Ireland wants a close future trading deal with the UK, but at this point the commitments already made need to be honoured.”

The EU, supported strongly by the Government, insists that any backstop should last unless and until there is another solution found in a future EU-UK trade pact.

Minister for European Affairs Helen McEntee said that if London reneged on the backstop, then agreements already reached on citizens’ rights and the so-called divorce bill could be reopened.

Fianna Fáil leader Micheál Martin said Northern Ireland could have “the best of both worlds out of an eventual Brexit deal”. And the EU was offering an “extremely generous” package.

British prime minister Theresa May said last week the transition period after the UK departure next March could be extended beyond December 31st, 2020, by “a matter of months”. The transition arrangement is aimed at smoothing the path between Brexit and a future trade deal. Ms May’s comments have angered pro-Brexit MPs who believe it would leave the UK under EU rules for too long.

Ms May will tell the House of Commons on Monday that 95 per cent of the withdrawal agreement and its protocols are now settled. But she will reiterate her government’s opposition to any backstop that would avoid a hard border in Ireland by creating a customs line in the Irish Sea.

“The commitment to avoiding a hard border is one that this House emphatically endorsed and enshrined in law in the Withdrawal Act earlier this year. As I set out last week, the original backstop proposal from the EU was one we could not accept, as it would mean creating a customs border down the Irish Sea and breaking up the integrity of the UK. I do not believe that any UK prime minister could ever accept this. And I certainly will not,” she will say.

The EU suggests leaving Northern Ireland under its rules after Brexit or keeping the UK in an open-ended customs arrangement with the bloc.

The first threatened the break-up of the United Kingdom and the second left the country in “indefinite limbo” inside the customs arrangement and “would not really be Brexit at all”, Mr Raab wrote in the Sunday Telegraph.

“We won’t sacrifice Northern Ireland, and we must have finality to any backstop – whether through a time-limit or a mechanism that enables the UK to leave in case the EU doesn’t live up to its promise to get the future relationship in place swiftly,” he wrote. “People understandably want to know when the Brexit process will end.”